END_OF_DOCUMENT_TOKEN_TO_BE_REPLACED

Pope: Condoms aren't solution to AIDS; they make it worse

It's time for the Catholic Church to enter the 21st century; or at least try to drag itself out of the 13th. On his first trip to Africa, Pope Benedict XVI said condoms are not a solution to the AIDS epidemic; rather, they make it worse. 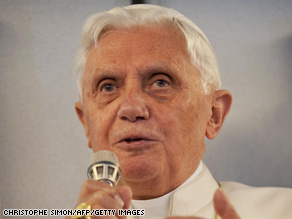 Since becoming pope four years ago, Benedict has stressed that the church is on the front lines of the battle against AIDS; with the Vatican encouraging sexual abstinence as the way to stop the disease from spreading.

Obviously that message hasn't delivered the desired results in Africa where parts of the continent have been ravaged by AIDS. Not to mention right here in our nation's capital: a new report shows three percent of Washington D.C.'s residents have HIV or AIDS. That translates to almost 3,000 people for every 100,000 population. That figure represents a "severe epidemic." One health official says Washington's rates are higher than parts of West Africa - and "on par with Uganda and some parts of Kenya."

Here’s my question to you: The pope says condoms aren't the solution to AIDS; they make it worse. Is he right?

END_OF_DOCUMENT_TOKEN_TO_BE_REPLACED

The buzz began before the papal plane had even touched down. There were rumors beginning to circulate that Benedict XVI might actually meet with victims of the sex abuse scandal in the Catholic Church. The Holy Father said he would speak forcefully and directly about the shame the scandal has brought upon the church.

But talking to the victims was something that had never happened, not at that level. And yet for true healing to actually begin this is what was necessary.

And it did. Without fanfare Benedict XVI this afternoon met with a small group of people who were sexually abused by priests. No reporters, no cameras, private, personal, and profound. We are told the Pope listened to their stories and prayed with them.

There is a very long way to go if in fact it is even possible for the Catholic Church to ever overcome the effects of this, but it's a start.

Here’s my question to you: How far has Pope Benedict XVI gone toward healing the wounds of the church's sex abuse scandal?