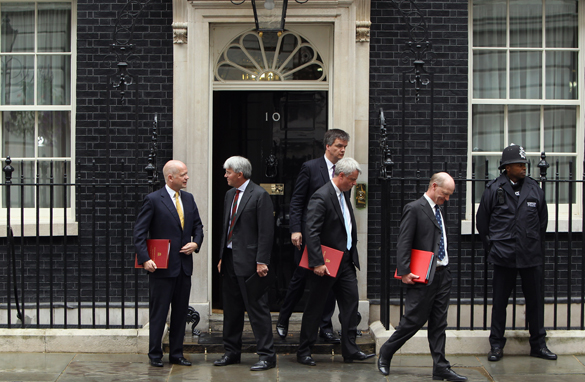 Defense Secretary Robert Gates - who is refreshingly open and honest - said: "We haven't done something like this, kind of on the fly before."
[cnn-photo-caption image=http://i2.cdn.turner.com/cnn/2011/images/03/23/art.libya.france.jet.jpg caption=""]
He was talking about the coalition attacks on Moammar Gadhafi's forces in Libya, why the United States was still in control, why tensions are rising among members of the coalition, why there's no plan for any group or nation to take the lead. The allies, you see, aren't getting along so well. In fact, there are reports today that the coalition is falling apart.

France yesterday suggested a committee be formed - outside of NATO - to oversee the military operations. It would be a political steering committee and would include members of the Arab League. See if a committee is running the war, no one has to take responsibility if things go to hell and everyone can take credit if they go well.

The French were early backers of the no-fly zone and were the first nation to launch airstrikes against Libya on Saturday.

The Italians have accused the French of not originally backing a NATO-run operation to be in a better position for oil contracts when a new government is established in Libya.

It's not just the French causing problems…

Russia's defense minister yesterday called for a cease-fire in Libya.

Germany today pulled its naval ships out of NATO operations in the Mediterranean over a disagreement over the Libyan campaign's direction. It's not pretty.

Foreign ministers from Western coalition partners will meet in London Tuesday along with members of the Arab League and the African Union to see what can be done.

Here’s my question to you: France wants a committee to run the war in Libya. Is that a good idea?