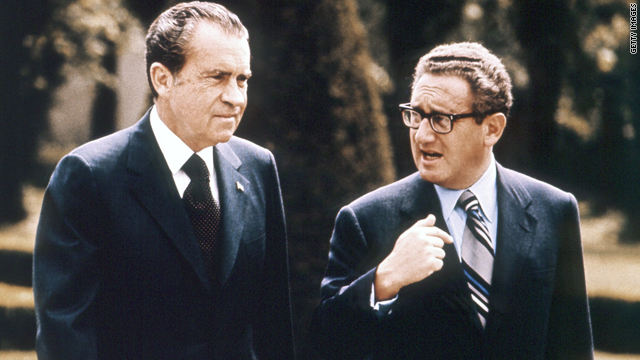 What will be the 'October Surprise' in this year's presidential election?

If it's October and it's a presidential election year, then it's just about time for a so-called “October surprise.”

That means any late-breaking event that can change the outcome of the race.

For example: Twelve days before the 1972 presidential election, Henry Kissinger made a major announcement about the Vietnam War, saying "We believe peace is at hand." This likely helped the incumbent Richard Nixon go on to win every state but Massachusetts.

The most famous October surprise was one that never came. In 1980, Republicans were worried that President Jimmy Carter would be boosted in his re-election bid by a rescue or release of the American hostages in Iran. That didn't happen - and Ronald Reagan won the election in a landslide.

The year 2008 saw the financial meltdown, which technically started in September with the collapse of Lehman Brothers. It was a moment that boosted Barack Obama and highlighted John McCain's weakness on the economy.

That old video of an angry speech with racial overtones by then-candidate Obama which resurfaced last night could sway voters.

Or maybe the surprise is still lurking. Tonight's debate certainly has the potential to provide one.

There's always a chance for significant economic news - a jobs report, or the potential of the U.S. falling off that fiscal cliff.

And it's not hard to imagine some unexpected event in the Middle East. Take your pick: Iran, Israel, Syria, Libya.

Here’s my question to you: What will be the “October Surprise” in this year’s presidential election?