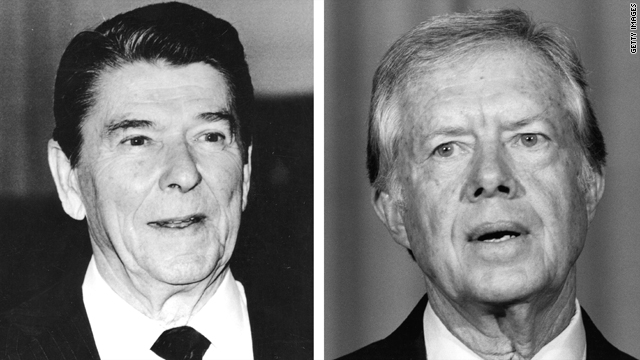 At least that's the message coming from many Republicans to their party's presidential candidate.

Politico reports that comparisons to the 1980 race - when President Jimmy Carter lost to Reagan in a landslide - just don't hold up.

One Reagan biographer calls the comparison a "stretch" and says Romney needs to do a lot more at this point to win than Reagan did.

For starters, President Barack Obama remains personally popular among Americans despite a grim economy. Obama's approval is at around 50%, compared with 37% for Carter at this point in 1980.

Although Reagan trailed Carter in some polls - kind of like Romney - his unfavorable ratings weren't increasing. Romney just isn't connecting with voters like Reagan did.

What's more, Reagan was the overwhelming favorite of the Republican base; compare that to Romney: Many conservatives have never warmed up to him.

Another big difference between 1980 and today is the electoral map. Reagan ultimately carried one in four Democrats in that election. It's hard to imagine Romney ever pulling that off in today's highly polarized electorate.

Nonetheless, one top Romney adviser says the 1980 race shows there's no need to panic if Romney is down in the polls at this point.

Plus it's not the first time Obama - a weakened, liberal incumbent with a troubled economy and problems in the Middle East - has been compared to Carter.

Here’s my question to you: How is Romney-Obama like Reagan-Carter?

Lou:
Um, not anything at all. Romney is no Reagan. Whether you agreed with Reagan or not, when he took a stand he stuck to it. Romney has been all over the place on every issue. People compare Obama to Carter because they say he is weak on foreign policy but the comparisons don't hold water. How can you compare a rescue mission that failed to a secret hit mission that succeeded?

Patrick:
The parallels between this election and 1980 are uncanny. We have a bad economy with high unemployment just like 1980. Our respect around the world has diminished greatly in particular in the Mideast. We have a president who preaches redistribution of wealth. Carter agreed with the same type of system. Romney like Reagan is preaching more self-reliance and less dependency on government.

Grant:
This election is nothing like Reagan-Carter. During that election, we had the problems of the oil embargo compounded with the Iran hostage crisis. Reagan was well-liked. No one likes Romney, not even his Republican backers. Reagan had finesse and showmanship and Romney doesn’t.

George in Pennsylvania:
There is no similarity whatsoever. Romney-Obama is like paying big money for a Broadway show and then finding out that the understudies are going to perform instead.

Vinny in Connecticut:
Carter and Obama are so similar, Jack. We have a miserable depression, a totally failed foreign policy, a total lack of leadership and a failed presidency of someone so incompetent that you can't believe he ever got elected. Romney will be the Reagan of 2012 and win in spite of all these phony polls put out by the corrupt media.

Dan:
It's not. Comparing Mitt Romney to President Reagan is like comparing Junior Samples, of "Hee Haw" fame, to Stephen Hawkings.