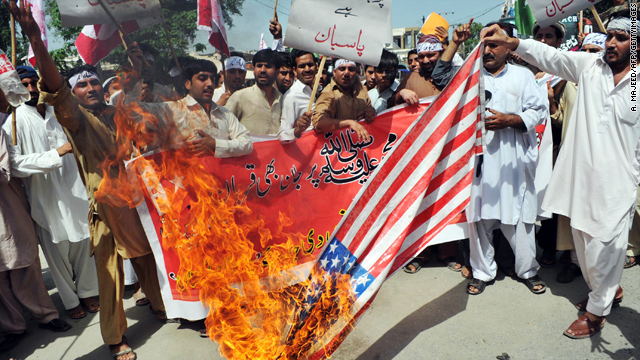 How satisfied are you with U.S. policy in the Middle East?

Anti-american protests, some of them violent, are raging on in the Middle East and it could get worse tomorrow - the Muslim day oF prayer.

In Islamabad, Pakistan - thousands protested the anti-Islamic film and cartoons of Mohammed outside foreign embassies, including America's, and police responded with tear gas and warning shots.

And in Iran, demonstrators in Tehran protested against the same film, shouting anti-American and anti-Israel slogans.

All this after the killing of America's ambassador and three others in Libya last week along with more anti-U.S. protests in Egypt, Yemen and Tunisia to name a few.

Back in the United States, the Obama Administration is facing questions about embassy security in the wake of the attack on the consulate in Benghazi.

Secretary of State Hillary Clinton was scheduled to testify to Congress in a closed intelligence briefing today.

It's been suggested that the U.S. was warned about the attack in Libya three days in advance.

But the administration insists they haven't seen intelligence about "significant advanced planning" for the attack.

But interestingly, the White House is now calling the deadly assault on the U.S. consulate in Benghazi a "terrorist attack" for the first time. And it happened on the anniversary of 9/11.

U.S. relations with Israel, at least on the surface, appear to be getting much worse as President Obama continues to say he doesn't have time to meet with Israeli Prime minister Benjamin Netanyahu.

Iran is continuing its march toward nuclear weapons, and Syria continues to murder its own people.

Here’s my question to you: How satisfied are you with U.S. policy in the Middle East?