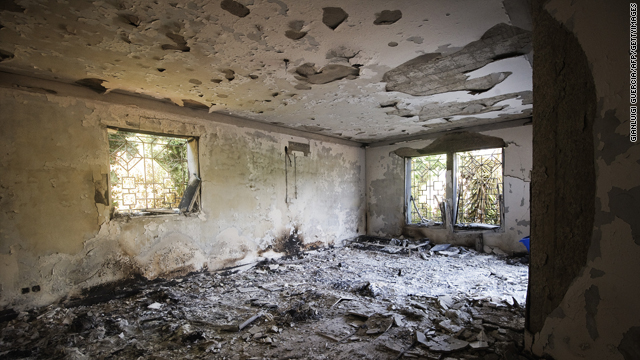 The damage inside the burnt U.S. consulate building in Benghazi following this week's attack in which the U.S. ambassador to Libya and three other U.S. nationals were killed.
September 13th, 2012
04:00 PM ET

Should the U.S. halt foreign aid to Libya and Egypt?

The violence in the Middle East has renewed questions about which countries get U.S. foreign aid and whether they deserve it.

Some House conservatives wanted to strip foreign aid to Libya and Egypt from a six-month funding bill set for a vote today. That's not going to happen because it was too late for any changes to this bill.

Nonetheless, some Republicans are questioning if the U.S. should keep giving money to countries run by "radical Islamists" such as the Muslim Brotherhood in Egypt.

Others say before handing out aid, the U.S. should make sure Libya is helping with the investigation into the attack and murder of our ambassador and three other Americans.

But not everyone agrees. According to The Hill newspaper, senior House Republican David Dreier of California says it would be a "big mistake" to cut funding to Libya and Egypt. Dreier says it's essential now more than ever to "strengthen ties with these fledgling democracies."

It's worth pointing out that as millions of Americans suffer under a weak economy, our government is sending lots of money we don't have overseas to other countries. U.S. foreign aid to Egypt is about $1.5 billion a year. That's second only to Israel.

And Mohamed Morsy, the new Egyptian president, didn't even apologize for the attacks on the embassy in Cairo until today, two days after they happened. That tells us quite a bit.

The U.S. had withheld aid to Egypt this past year when the government was cracking down on protesters. Now a decision will have to be made whether to do it again.

Here’s my question to you: Should the U.S. halt foreign aid to Libya and Egypt?