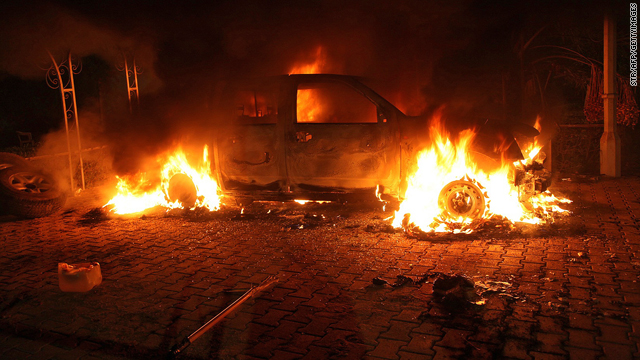 A vehicle and the surrounding area are engulfed in flames after it was set on fire inside the U.S. consulate compound in Benghazi last night.
September 12th, 2012
03:55 PM ET

How will the meltdown in the Middle East affect the U.S. presidential election?

The violence in Libya has suddenly yanked the spotlight off the economy and put it squarely on foreign policy as far as the U.S. presidential campaign is concerned.

Romney said that a statement from the U.S. Embassy in Cairo was like an apology, calling it "disgraceful to apologize for American values." Other Republicans are jumping in, blasting the president's "failed foreign policy of appeasement and apology."

The White House has disavowed the embassy statement, saying it did not approve the statement. In it, the Cairo embassy condemned "continuing efforts by misguided individuals to hurt the religious feelings of Muslims." This all goes back to a film produced in the United States that some Muslims found offensive.

Meanwhile the president condemned the attacks and said we must "unequivocally oppose the kind of senseless violence" that took the lives of four Americans, including the U.S. ambassador to Libya.

The president's campaign said Romney is using the tragic events for political gain.

Others agree that Romney may have jumped the gun with his response.

Sen. John Kerry called Romney's remarks irresponsible, inexperienced and reckless. He said Romney was wrong to weigh in before all the facts are known.

As for voters, they tend to trust the president more on foreign policy. A CNN/ORC International Poll released this week showed President Barack Obama with a 54%-42% advantage over Romney.

Here’s my question to you: How will the meltdown in the Middle East affect the U.S. presidential election?