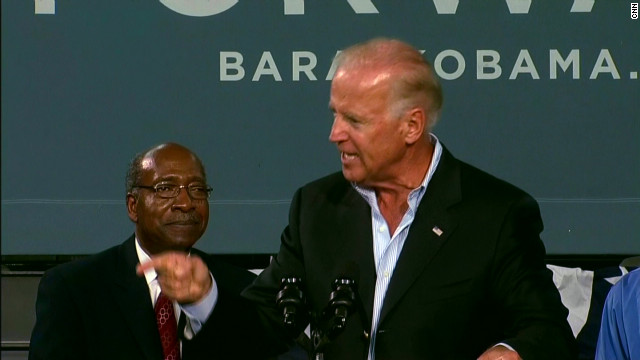 President Obama isn't backing away from Joe Biden's comments about putting people "back in chains," which is pretty remarkable when you think about it.

Speaking to a predominantly black crowd yesterday, the vice president said Mitt Romney's vision of regulating the big banks would quote "unchain Wall Street" and put "y'all back in chains."

Biden said this in Danville, Virginia – a city with a long history of racial tension.

He later tried to clean up after himself by saying he was referring to the Republicans' use of the word "unshackled" when talking about banks. It was too late as he had already caused a firestorm.

Biden has a long history of saying dumb stuff. What's alarming here is the nation's first African-American president is OK with this kind of language.

The president's deputy campaign manager told MSNBC she doesn't think Biden went too far when taken in context. She said, "We have no problem with those comments."

This is the same kind of insensitivity the president showed when he said "If you've got a business, you didn't build that."

Romney is blasting Obama, saying his campaign is all about "division and attack and hatred." The Romney campaign calls Biden's comments "a new low." Hard to argue with that.

Often times what Joe Biden says is entertaining and can be written off to be putting his mouth in motion without engaging his brain. But the comment about putting people back in chains is loaded with racial overtones and is a long way from being cute.

It should have been embarrassing for the nation's first black president.

But apparently it wasn't.

Here's my question to you: Should the White House apologize for the vice president's remarks about putting people "back in chains"?