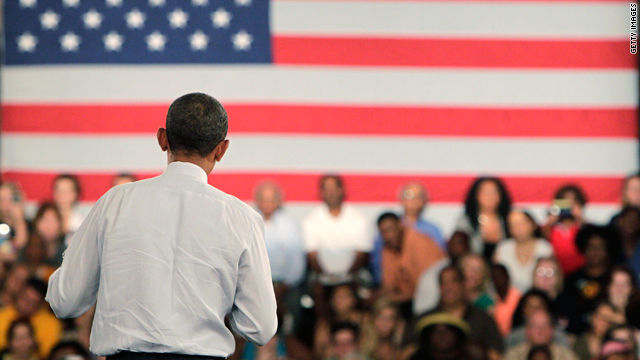 Should the economy prevent President Obama from winning a second term?

The latest New York Times/CBS News poll shows Mitt Romney with a 1-point lead over Obama with 4% of voters undecided. And when asked about the economy, the difference is even more glaring. Romney holds an 8 percentage point lead over the president. Just 39% of those surveyed approve of the president's handling of the economy. That's down from 44% in April.

More bad news for the president:

In the crucial battleground of Virginia, Romney has closed a 12-point gap with Obama, and the two are now tied, according to the latest Quinnipiac University poll. In 2008, Obama became the first Democrat to win that state since 1964.

Suffice to say that if there is no significant improvement in the economy - and it better start soon - Obama could have problems in Virginia and elsewhere.

The jobs picture remains bleak. Unemployment has been above 8% for 41 consecutive months now. Forty-one months. This morning, first-time jobless claims jumped sharply - up 34,000 from the previous week.

A new Gallup Poll shows Americans overwhelmingly say creating "more or better jobs" is the most important thing the government can do to jump-start the economy. That’s why some of the president's words and actions aren't helping much.

Many took issue when Obama said, "If you've got a business, you didn't build that. Somebody else made that happen."

Then there's the president's "jobs council." It hasn't even met for six months. The White House says Obama has "obviously got a lot on his plate" while Republicans suggest he's had time in the past six months to attend more than 100 fundraisers and play golf 10 times.

Here’s my question to you: Should the economy prevent President Obama from winning a second term?