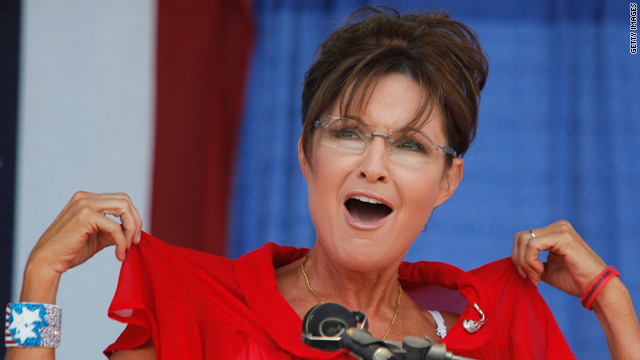 Should Sarah Palin be invited to speak at the Republican Convention?

"It's time for Mitt Romney to man up, pick up the phone, and ask Sarah Palin to the dance."

That's a quote from a Daily Beast piece that argues Romney should invite Palin to speak at the Republican convention in Tampa, Florida, next month.

Palin is complaining to Newsweek that she hasn't been asked to attend the convention yet. She said, "One must remember this isn't Sadie Hawkins and you don't invite yourself and a date to the big dance."

Maybe the Republicans are thinking the downsides to inviting Sarah Palin - anywhere - are pretty obvious:

The former VP candidate and half-term governor of Alaska is a wild card and her off-the-cuff remarks could create headaches for Romney. Palin is polarizing and she could turn off independent voters. Plus she doesn't seem to have much love for Romney so there's always the risk that she could go "rogue."

Never mind all that. Romney might be making a big mistake by not inviting her. It's not like he has this thing wrapped up.

Sarah Palin can do something Mitt Romney can't: fire up the base.

The party faithful went wild when she delivered her "pit bull-hockey mom" convention speech in 2008. And let's face it: Romney could use something to spice up his campaign. So far, electric it ain't.

There are few, if any, other Republicans in 2012 who generate the kind of enthusiasm Palin does.

Plus Mitt Romney was never a tea party favorite. As Newsweek describes it, party activists "feel stuck with a guy served up by Republican elites who speak conservatism with an establishment accent."

Bringing Sarah Palin on board in Tampa might help in this department, too. Her accent is anything but establishment.

Here’s my question to you: Should Sarah Palin be invited to speak at the Republican Convention?