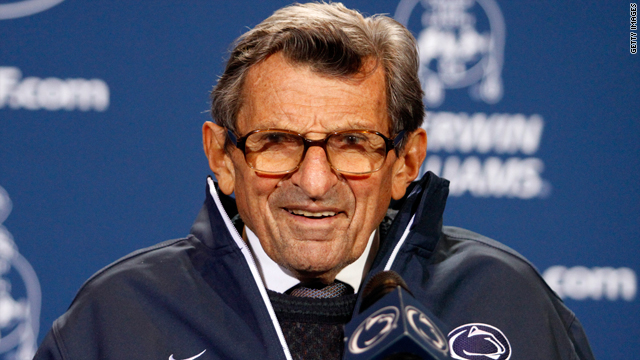 How wrong was the late Joe Paterno when he said the Sandusky scandal didn't tarnish Penn State?

See what this quote reminds you of:

"This is not a football scandal and should not be treated as one. It is not an academic scandal and does not in any way tarnish the hard-earned and well-deserved academic reputation of Penn State."

But in this case the voice belonged to the late, once-great Joe Paterno, who wrote that in a letter before he died.

Paterno achieved legendary status as the coach of the Penn State football team.

Yet he was busy like other key officials on campus turning a blind eye to a pedophile on his staff - who had been given carte blanche by Mr. Paterno and the administration at the university to prey on young boys.

A newly released, scathing investigation by former FBI director Louis Freeh reveals that those key officials knew about Jerry Sandusky for 14 years and they did nothing.

And these holier-than-thou football coaches and school administrators turned a blind eye rather than jeopardize one of the most successful college football programs ever.

The money and the prestige of the football program were more important to Joe Paterno and his bosses than the ruined lives of young children who were molested, sodomized, raped and otherwise abused by Jerry Sandusky - a high-ranking member of that football program.

Sandusky is going to rot in prison for the rest of his life, which is exactly where he belongs.

And had Joe Paterno lived, he should have gone to prison with him.

But to the end, Paterno lived in denial.

Here’s my question to you: How wrong was the late Joe Paterno when he said the Sandusky scandal didn't tarnish Penn State?