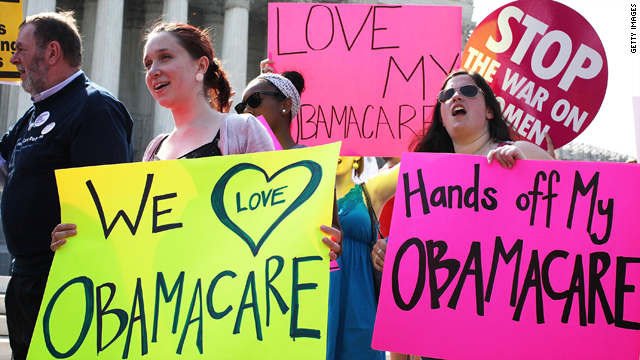 How does today's health care ruling affect your opinion of the Supreme Court?

The Supreme Court reminded us all in an instant Thursday morning what an enormous impact these nine justices can have on the lives of millions of Americans.

And what came as a surprise to many was that Chief Justice John Roberts, a George W. Bush appointee, broke with the conservatives and sided with the court's liberal justices in favor of Obamacare and the individual mandate.

In a way it was curiously refreshing, whether you agree with the court's decision or not.

That's because many have come to believe that politics have played an outsize role in the high court's decisions in recent years. It probably really got going in 2000, with Bush v. Gore, which effectively handed the presidency to Bush.

Then two years ago came the Citizens United ruling allowing unlimited spending by corporations and unions on elections as long as it's independent of campaigns.

Whatever the reasons, there has been a marked decline in the Supreme Court's approval rating.

The New York Times/CBS Poll shows an overwhelming 76% of those surveyed say the Supreme Court justices sometimes let their personal or political views influence their decisions. Only 13% think the court's decisions are based only on legal analysis.

But the court's critical ruling Thursday might move the needle once again when it comes to how we view the highest court in the land.

Here’s my question to you: How does today's health care ruling affect your opinion of the Supreme Court?

Jayne in New Hampshire:
I had been convinced the Supreme Court was a completely bought and paid for political operation, but with Justice Roberts deciding in favor of the law I have hope that it isn't. As a person who is currently enrolled in the pre-existing condition pool of the Affordable Care Act, I am very, very grateful the law has been upheld.

Frank:
My opinion of them has not changed and let’s just say that I don't view them with gusto. Unless and until there is a reversal of Citizens United the "Corporations Are People Too" decision, I'll hold fast to the thought that this court lacks a grasp of the obvious.

Eric in Houston:
Yes, particularly of Chief Justice Roberts. Absolutely brilliant! He single-handedly has partially defused the argument that the justices always split along partisan lines, and he has kept the court out of the middle of the most contentious issue in the upcoming election

Bonnie in New Jersey:
I supported the health care act and I am completely shocked that it was upheld. I would like to say it makes me have a positive opinion of them. But there is no way I can after Citizens United. I don't know how they can show their faces in public after that ruling.

Ken:
The Supreme Court was in danger of striking out in public opinion. Strike 1: The Florida recount decision. Strike 2: The Citizens United decision. The court’s leading hitter (Roberts) has hit a home run.