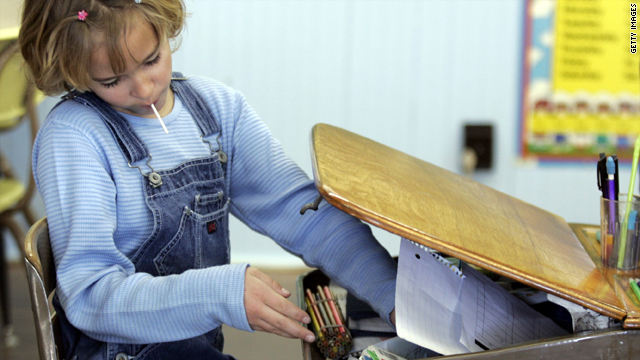 How can we restore confidence in our public schools?

Americans' confidence in public schools is at a 40-year low.

A new Gallup Poll shows only 29% of those surveyed say they have "a great deal" or "quite a lot" of confidence in public schools.

That's down 5-points from last year.

And it's down from 58% who had confidence in the country's public schools when gallup first asked the question in 1973.

It should come as no surprise that Americans have lost faith in our schools when you take a look at the dismal state of education.

One international assessment of 34 countries shows the U.S. ranking 25th in math, 17th in science and 14th in reading.

Many of our students graduate high school without the skills they need to survive in a global marketplace: things like reading, writing and math.

Meanwhile there seems to be little - if any - accountability when it comes to our schools and our teachers.

Just last month in the Cafferty File we told you about how Florida lowered the passing grade on the writing portion of a standardized test - after students' scores plunged.

And the latest example comes courtesy of New York.

State lawmakers voted to shield the job-performance reviews for hundreds of thousands of individual teachers from the general public. Instead - the new law allows parents to see scores only for their child's current teacher.

Supporters say it's the right balance between the educational needs of the students and the parents' and teachers' rights.

What about the public who pays these teachers' salaries? Aren't we entitled to know who's cutting it and who isn't? Yes, we are.

Credit the political muscle of the teachers unions with stifling another attempt to restore accountability.

Here’s my question to you: How can we restore confidence in our public schools?

Alex in California:
Jack, We used to have very good schools in this country. We used to know how to do this. No longer. As a former high school teacher, I know what happened and who's responsible. Our schools were ruined by the same catastrophic liberal experiments that ruined our families and the larger culture. America, and our schools, fell as liberalism rose. We won't fix our schools until the liberal mindset is swept aside,

Tom in Texas:
Stop selling war and purchasing every piece of military hardware on the planet, cut the defense budget by half, then reallocate those funds to education. Forever. We will still have a bloated military but now those in the military will be able to read the operating instructions of the equipment.

Mark in Houston:
My wife was a teacher with three advanced degrees for 45 years. When she had the right to "run the classroom", there was seldom a problem. Students who didn't behave were disciplined, students were taught to think not just take tests. No Child Left Behind changed all that. Now if a student does poorly, no matter his behavior or family support it's the teacher’s fault. Education, if that's what it's still called, is nothing more than a concept that places blame everywhere but where it belongs: on the students.

Steve:
We can start by teaching the basic reading and writing skills that so many of our high school students haven't apparently learned yet from elementary school.

Susan in California:
Stop using the school for babysitting. Leave technology at home. If you need your parent, the school will call them for you just like they did back in the dark ages when I was in school. If the parents make excuses for their children's poor behavior, they will become poor excuses for adults.