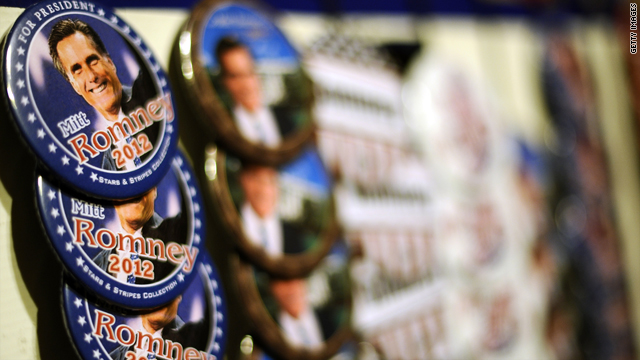 How can Republicans attract voters other than old white men?

If Mitt Romney wants to be president, he's going to need help from voters who aren't old white men.

He's got his work cut out for him.

A Politico piece headlined "Barack Obama's group therapy” describes how the re-election campaign has been reaching out to key voting groups by focusing on issues like the contraception fight, equal pay for women, gay marriage, student loans and immigration policy.

One GOP pollster told Politico that Romney can win if "Republicans decide that it's OK to look outside the country club for some votes."

For his part, Romney is sticking to his message of the economy, hoping it will appeal to all voters.

The traditional Republican base of white voters is shrinking, and if Romney wants to win, he needs minorities and women.

According to the Politico piece, Republicans traditionally get 87% of their votes from whites.

To be fair, Romney is also doing some outreach of his own.

He'll speak Thursday in Florida to NALEO, the National Association of Latino Elected and Appointed Officials. Later this summer, he'll address the National Convention of the NAACP.

The question is how much credibility he has with these groups. Marco Rubio or Condoleezza Rice could help.

Here’s my question to you: How can Republicans attract voters other than old white men?

Pete in Florida:
Simple. Stop trying to divide us. Start working with Democrats in Congress to create jobs and fix our economy. Get rid of Grover Norquist, nobody elected him. Accept the fact that it's going to take both spending cuts AND revenue increases to rein in our deficit and debt. Tell Limbaugh to SHUT UP. And Beck. And Palin. And Coulter. And Trump. And every other divisive clown like them. Oh, and STOP LYING!

Thom in Michigan:
Get an electable candidate. Stop being racist and elitist. Do something, anything, for the working class. Stop preaching politics and leave religion out of the election.

Vinny in Connecticut:
Are you serious, Jack?! Old white men? Was it just 'old white men' who gave the majority of the House to the Republicans in 2010? Was it just 'white old men' who elected Scott Brown to the Senate seat held for years by Ted Kennedy? Is it just 'old white men' who are polled showing that Romney is ahead of Obama nationally and ahead, tied, or only 1 or 2 pts behind Obama in traditionally 'safe' Democrat states? What a really dumb and 'loaded' question.

Curtis in Philadelphia:
They can start by being a bit more inclusive in what they stand for. Believe it or not Jack, not everyone is a millionaire, not everyone is pro-gun, pro-war, while insisting that they are also pro-life. For the record, I'm a middle aged, almost 50, white guy and they've got nothing for me.

Allen in Texas:
Maybe a pair of M.C. Hammer pants would be a good start, but please don't ask who let the dogs out!

Larry in Texas:
I don't know, Jack. You tell us, aren't you an old white man?