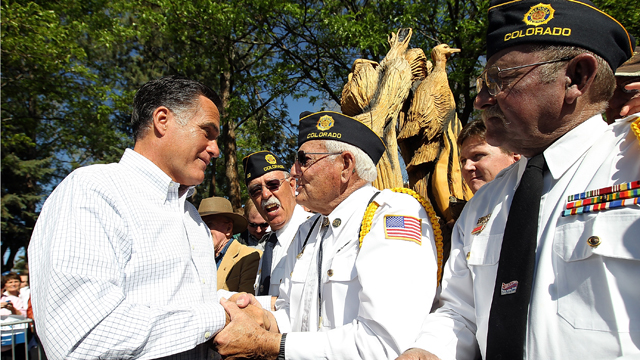 What does it mean if Mitt Romney leads President Obama by 24 points among veterans?

Right on the heels of Memorial Day comes a strong suggestion that President Barack Obama could have problems with military veterans in November.

A new Gallup Poll shows that veterans support Mitt Romney over Obama by a whopping 24 points - 58% to 34%.

Veterans make up about 13% of the population as well as almost a quarter of adult men. Pollsters say this large edge among veterans is a big reason why Romney leads among men overall.

Historically, Republican presidential candidates do better among veterans than Democrats. Both George W. Bush and John McCain carried the veteran vote, but Obama won veterans under 60 in the last election.

It's worth pointing out that another poll this month found the president leading Romney among veterans 44% to 37%.

Meanwhile, both Romney and Obama saluted the troops over the Memorial Day weekend.

The president honored the veterans of the wars in Iraq and Afghanistan and those who "loved their country enough to sacrifice their own lives for it."

He talked about the importance of providing health care, benefits and education for veterans. His campaign has been highlighting the killing of Osama bin Laden, the end of the Iraq war and the push to wind down the Afghanistan war.

Romney addressed global threats at an event with Sen. John McCain. "I wish I could tell you that the world is a safe place today," Romney said, telling veterans that the United States must remain the world's top military power.

This year is the first election since World War II without a major candidate who is a veteran. And it's clear both men realize the power of this voting bloc.

Here’s my question to you: What does it mean if Mitt Romney leads President Obama by 24 points among veterans?