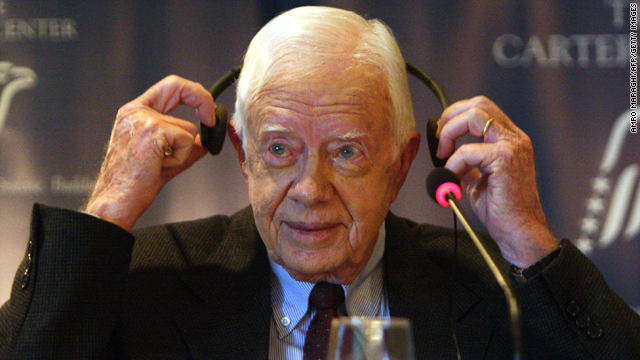 Mitt Romney is hoping Jimmy Carter can help him win the White House.

The likely Republican nominee has been comparing President Barack Obama to the former Democratic president on the campaign trail.

For example, when Romney was asked if he would have approved the bin Laden raid, he answered "even Jimmy Carter would have given that order."

And when talking about the economy, Romney described the Obama White House as "the most anti-small business administration... probably since Carter."

For many, the name alone evokes an incompetent, liberal commander-in-chief and a time of recession, inflation, unemployment, high taxes and gas prices, more government and a sort of national malaise..

And, as Politico points out, by framing yourself as Carter's enemy, you can try to make yourself Ronald Reagan. Brilliant. If it works.

Meanwhile Michael Barone suggests in a column on "Real Clear Politics" that the 2012 election could mirror what happened in the 1980 race between Carter and Reagan. There was a late break away from the incumbent that year.

Jimmy Carter actually led Ronald Reagan in the polls for much of the race. His job rating was kept higher by attempts to free the Iran hostages even though voters were unhappy with the economy and other issues.

But during a debate just days before the election, Reagan famously asked: "Are you better off than you were four years ago?" Suddenly the polls took a 10 point shift in Reagan's favor. He won in a landslide.

Barone suggests that despite economic concerns and opposition to Mr. Obama's policies, voters might be keeping his ratings artificially high for fear of rejecting the first black president. They might change their support to Romney at the last minute.

Here’s my question to you: Is former President Carter an effective weapon in Mitt Romney's campaign against President Obama?