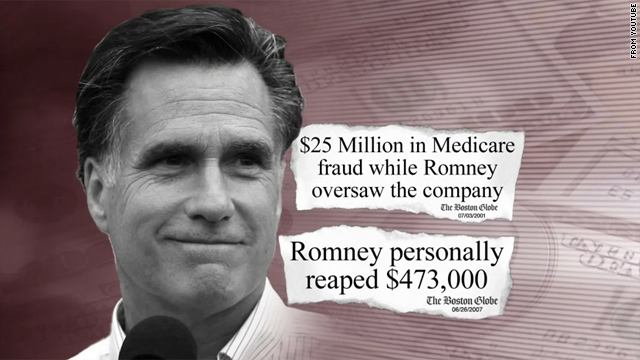 This is a screengrab from an anti-Romney ad that the American Federation of State, County and Municipal Employees aired in Florida, accusing him of making a $473,000 profit from his firm's investments in a medical company that admitted engaging in Medicare fraud.
May 8th, 2012
03:33 PM ET

Why do negative campaign ads work?

When it comes to presidential campaign ads - it's already ugly out there. Very ugly.

A new study shows negative campaign ads in the race for the White House have skyrocketed since 2008.

According to the Wesleyan Media Project, 70% of presidential campaign commercials run so far have been negative. 70%. That compares to just 9% at this point in the 2008 campaign.

Experts say part of the reason for all this negativity is the "skyrocketing involvement of interest groups." Their activity is up 1,100% from four years ago. But it's not just the interest groups that are going negative. The campaigns are also to blame.

The study shows more than half of the ads put out by the campaigns have been negative, as well as 86% of the commercials put out by independent groups, like Super Pacs. That's a lot of trash talking.

These groups are dominating the airwaves, accounting for about 60% of commercials. The campaigns account for just 36% of the spots. Compare that to 2008 when virtually all of the ads in the White House race - 96% - came from campaigns.

We have the Supreme Court to thank for the outsized role of outside groups. The 2010 Citizens United decision allows for unlimited donations by corporations as long as they're made to groups independent of the candidate. Like Super Pacs.

Meanwhile with six months to go until the election, get ready for an onslaught of negative ads from both sides.

That's because even though voters say they don't like negative campaigning, the ads are effective. Experts say negative ads tap into emotions like anxiety, fear and disgust - that can push a voter away from a candidate.

Here’s my question to you: Why do negative campaign ads work?