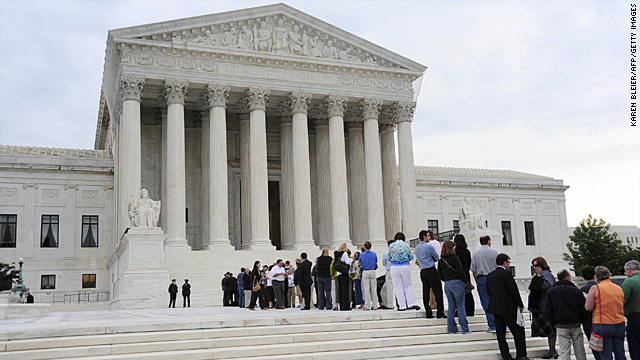 What role might the Supreme Court play in the next presidential election?

Suddenly the Supreme Court is looming large in yet another presidential election.

In the 2000 contest between George W. Bush and Al Gore, the High Court ruled the recounting of votes in Florida - remember those hanging chads - must stop.

Al Gore got about 500,000 more popular votes. But the Supreme Court gave Bush the edge in Florida - and he went on to win the election.

That decision effectively handed the presidency of the United States to George W. Bush.

Flash ahead to 2012. Twice within the last four weeks, the Supreme Court has agreed to hear cases - health care and immigration - that could have huge implications for the outcome of another presidential election.

Court watchers say the justices seem to be leaning toward rolling back part - or all - of President Obama's hallmark legislation of his first term. The individual mandate appears to be in serious jeopardy - and with it, the whole law might go.

Then, almost without missing a beat, the Supreme Court decided to hear arguments on Arizona's tough new immigration law.

It's no secret the federal government under Presidents Obama, Bush - go back as far as you like - has made virtually no serious effort at securing our nation's borders – especially with Mexico.

Finally being fed up, Arizona took matters into its own hands.

Interestingly it looks like the Supreme Court may side with Arizona. And again the implications could be huge.

Both rulings are expected in June - just a few months before America elects its next president.

Republicans will use any decision against President Obama as ammunition.

However if the president loses either of these cases it could become a perfect way to mobilize the Democratic base, including Hispanic voters.

Here’s my question to you: What role might the Supreme Court play in the next presidential election?

Dave in Orlando:
A major role. If they strike down the health care bill, it will be a serious body blow to the president. It was the only thing he accomplished, meaningless as it is.

Richard in Texas:
If the Supreme Court overturns Obama’s health care reform and his lawsuit against Arizona on illegal immigration then it will tell the world, not just people of the Unites States, that the president, a lawyer, is not the sharpest pencil in the box - and that his side of Congress, which wrote the law, isn't either. It would be a big slap in the face to Democrats.

Ralph in Oklahoma:
Could be they'll reprise their year-2000 role as Republican spoiler: except this time it's not chads hanging in the balance, it's 30 million uninsured American lives. Flesh and blood, not partisan ideology.

Ken:
Big, colossal, gigantic, a Romney killer. If the Arizona immigration law is upheld, the large Hispanic community will turn out in force to vote for Obama. If you don't get that, your combination plate is missing everything but the beans.

Wilene in Texas:
If the Supreme Court rules against the health care bill and in favor of the Arizona immigration bill, it will be a blow to President Obama's credibility.