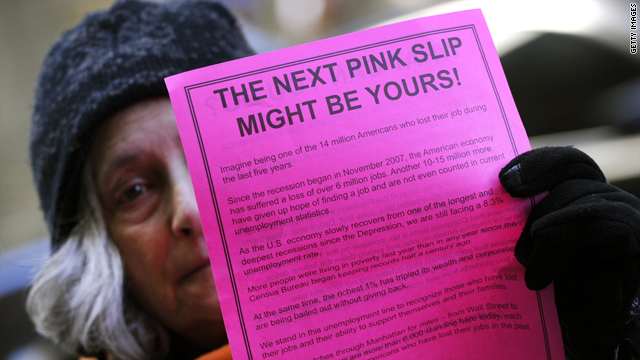 How likely is it that you will be laid off or lose your job in the next six months?

Nearly 7 in 10 Americans say they know someone who has either been laid off or lost their job in the last six months, according to a new Gallup Poll. And that's the highest in Gallup's history of asking this question.

Numbers like these could have huge political implications for President Obama come Election Day in November.

This is actually an improvement from last year, when 90% of Americans said it was a bad time to find a job.

This is interesting. Even though most Americans know someone who has lost a job, only 15% say it is "very or fairly likely" that they personally will lose their job or get laid off in the next year.

The national unemployment rate is at 8.2%.

Hiring slowed dramatically in March, with employers adding only 120,000 jobs, down from 240,000 jobs in February.

While the unemployment rate declined a little last month, it's because people dropped out of the labor force.

Economists surveyed by CNN Money predict the unemployment rate will slip to 8% by the end of the year.

But 8% unemployment could still present a huge challenge for President Obama. Eight percent is a far cry from the 4.4% unemployment rate before the recession.

President Obama might want to take note. Since 1948, only one incumbent president has won re-election with unemployment at more than 7%. That was Ronald Reagan in 1984.

Here’s my question to you: How likely is it that you will be laid off or lose your job in the next six months?