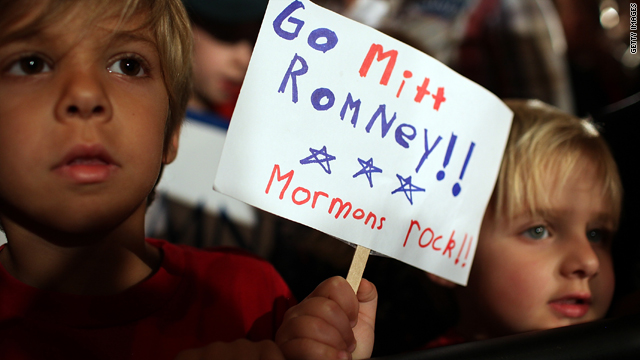 Mitt Romney is a Mormon. How much will it matter?

Now that Mitt Romney is the likely Republican nominee - he may need to starting talking about his Mormon faith.

Politico reports that many Republicans think Romney should embrace his Mormonism publicly so people can better understand him.

During the GOP primaries, Romney has gotten pushback from evangelicals, some of whom question whether Mormons believe in Jesus Christ. One Texas Baptist pastor and Rick Perry supporter called the Mormon church a "cult."

But these days it seems like some evangelicals are more open to the idea of voting for Romney - especially when the other option is President Barack Obama.

Mormonism is a big part of who Romney is. He traveled on a two-year mission in France as a young adult, raised his five sons as Mormons and has held several church leadership positions.

Nonetheless, Romney doesn't really like to talk about it. In the lead-up to the 2008 presidential campaign, he addressed his religion in a "60 minutes" interview and in a speech called "Faith in America."

His aides have said that he has no "immediate plans" to make another formal speech for now.

But maybe he should. It could help clear up lingering questions about Mormonism, a religion that still seems odd and insular to many. It has a tainted past that includes racism and polygamy.

A CNN/ORC International poll taken in October showed 17% of Americans say that they would be less likely to vote for a presidential candidate who is a Mormon, while 80% said it would make no difference.

Of course, religion and politics are a difficult equation. Many Americans thought John F. Kennedy would never get elected president in 1960 because he was Roman Catholic.

Here’s my question to you: Mitt Romney is a Mormon. How much will it matter?