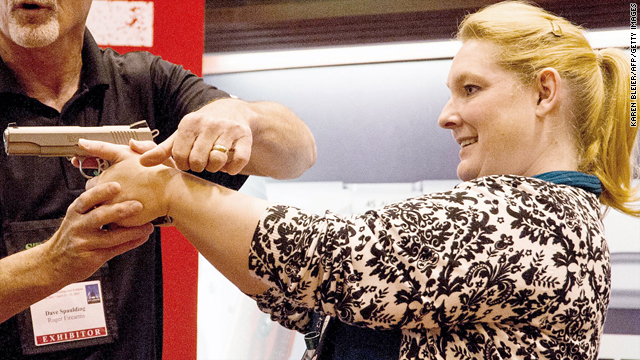 What's behind the surge in women gun owners?

Gun sales are booming, and women are a big part of the reason why.

The Daily Beast reports on the National Rifle Association getting in touch with its feminine side at its annual convention. Companies sell all sort of things: pink firearms, guns that are small enough to fit in a small purse, black and pink shooting targets and even a bra holster.

As the inventor of the Flashbang Women's Holster tells The Daily Beast: "Nothing comes between a girl and her gun."

Of course if you're carrying a gun there, you want to be doubly sure the safety is on. The National Sporting Goods Association says nearly 47% more women are shooting today compared with 10 years ago, and a Gallup Poll last year found almost one in four American women own at least one gun.

The number of women at NRA shooting clinics has skyrocketed in the last decade. Gun ranges hold ladies' nights and enrollment in one women's conceal-carry class in Oklahoma is reportedly up 400%.

Female gun enthusiasts give different reasons for the spike in ownership. Some cite security while others say it's an extension of gender equality. The NRA denies it's going after women over any other demographic group. They say they want everyone to be a member of the NRA.

Overall, gun sales are way up in the U.S., with big profits for gun makers such as Smith & Wesson.

Some say the trend is because of fears of a second Obama term and a potential tightening on gun restrictions. Others say a weaker economy makes people feel unsafe.

Here’s my question to you: What's behind the surge in women gun owners?