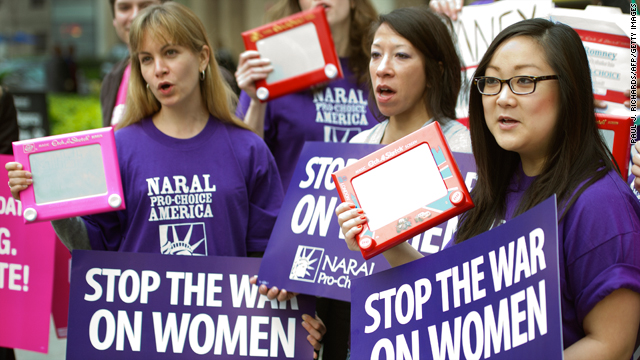 Members of the National Abortion Rights Action League (NARAL), Etch-A-Sketches in hand, call for a stop to the war on women and objected to Romney's proposal to stop federal support for Planned Parenthood.
April 9th, 2012
02:58 PM ET

How can Mitt Romney overcome his huge deficit among women?

Women may very well hold the key to the next election - and at least for now, President Obama is in the driver's seat.

In a dozen crucial swing states, the president holds a whopping 18-point lead among women over Mitt Romney. And Democrats are using every chance they can to accuse the GOP of waging a "war on women."

President Obama hosted a forum on women's issues at the White House - touting his administration's achievements on equal pay and workplace flexibility, saying "Women are not an interest group. You shouldn't be treated that way."

Republicans have traditionally faced a gender gap when it comes to women voters, but it looks like Romney faces a particularly steep uphill battle.

The Obama campaign says Romney's promise to "end planned parenthood" and his stance on contraception in employer health care plans will hurt him in the general election.

Some say Romney missed a golden opportunity to sway women voters by not taking a stand when Rush Limbaugh called a Georgetown law student a "slut" for her position on birth control.

Republicans insist the gender gap will disappear once the contentious GOP Primary ends. one of the ways Romney might ease the gender gap is by naming a woman as his running mate.

Meanwhile, the battle over women comes as the debate rages on over the refusal of the Augusta National Golf Club to admit them. First President Obama - and then Romney - called on Augusta to accept women.

Maureen Dowd writes that Augusta should "stop emulating the Saudis;" and "You know you're in trouble when Rick Santorum is urging you to be more progressive on women."

Here’s my question to you: How can Mitt Romney overcome his huge deficit among women?

Carolyn in California:
Spin, that's how. Security trumps all in the female vote. By dialing up his jobs and improved health care plans, and dialing back his promise to nix support for Planned Parenthood, he'll soon clear his screen of this sketchy issue and get more of us back than he's lost.

Connie in Indiana:
Romney keeps referring those questions of women to his wife. She drives two Cadillacs; I don't (they won't even let me sit in one). I had three kids and then used birth control; she had five kids and rails against birth control. She doesn't know me. Who does he think is running, him or his wife ?

Brian in San Diego:
The only shot he has left is to take a stand against the far-right elements of his party and say clearly "this is the wrong approach, I am not going to blindly follow this doctrine as president". Unfortunately for him, he's moved so far to the right already to try and win those voters that repudiating them now would just be seen as another flip-flop.

Ken in Seattle:
Romney can't seem to relate to anyone who isn't just like him. That's everyone who is not 1% of the 1% and not male. He has shown repeatedly by his own actions and words that he just doesn't care. He is further hampered by a Republican Party which cares even less about the rest of us than he does.

Frank in Los Angeles:
I can't think of anything short of ending his quest for the Presidency and opting instead for a shot on Dancing with the Stars. Other than that, anything he does to overcome this deficit with women voters will assuredly be smoke and mirrors.