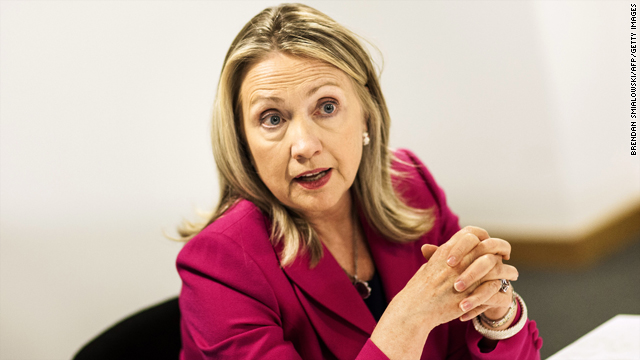 Why is there so much interest in a 2016 Hillary Clinton run?

The 2012 presidential election is still seven months away but perhaps not surprisingly many are already eyeing 2016 and Hillary Clinton.

The Secretary of State, former New York Senator and former First Lady is generating plenty of buzz even though she insists it's not happening.

Nancy Pelosi became the latest to weigh-in on Hillary's future, saying it would be "so exciting" to see Mrs. Clinton run in 2016. New York Sen. Kirsten Gillibrand, Donald Trump and even her husband, Bill Clinton, have been talking about it too, along with the chattering class of pundits.

The co-author of "Game Change" recently said there's a 99.4% chance Hillary will run for president in four years.

Pulitzer Prize winning columnist Maureen Dowd has suggested that maybe President Obama isn't a strong enough advocate for women, and that Hillary Clinton might benefit from renewed focus on issues like abortion and birth control.

Ever the politician, the former president is leaving the door open for his wife to run. Bill Clinton says "I believe she's being absolutely honest... when she says she doesn't think she'll go back into politics," but he adds that if Hillary changes her mind and decides to run for president, he'd be "happy."

For her part, Hillary Clinton has said she doesn't want to serve a second term in the Obama Administration. She says she wants to finish up as Secretary of State and then take time to reconnect with family and friends, hit the writing and speaking circuit, etc.

Hillary Clinton says all the talk about running for president is flattering, but that she's "not at all planning to do that." Hillary says she has no "desire or intention" to run.

Here’s my question to you: Why is there so much interest in a 2016 Hillary Clinton run?

Claudia in Houston:
The interest in Hillary Clinton for president in 2016 is simple: to save the country from the possibility of someone like Palin or Bachmann who are waiting in the wings to seize the spotlight.

Jack in Lancaster, Ohio:
Mr. Cafferty, Actually, until you mentioned it here I was not interested at all because I feel there should be an amendment to the Constitution that states: One president per family, please! Government has become all too much a family business, albeit a good one, a very good one.

Becky in Oregon:
With over half the U.S. population being female and feeling completely left out of the political debate, women need a proven intellectual politician to stand up and speak on their behalf.

Hugh in New Jersey:
Remember the polls in 2000? Allowed a third term, Bill Clinton would easily have beaten W. or any other opponent. The past 12 years make many of us wish that could have been. To me, Hillary in the Oval Office would represent hope for this country's return to the peaceful, affluent Clinton years.

Bobbie on Facebook:
Hillary Clinton vs. Sarah Palin? That'll be a historic match-up for sure!

Paul in Reno, Nevada:
One word: Do-over. That's what 2008 voters, spellbound by a charismatic Barack Obama's way with words, are desperate for: a little more steak with our sizzle.