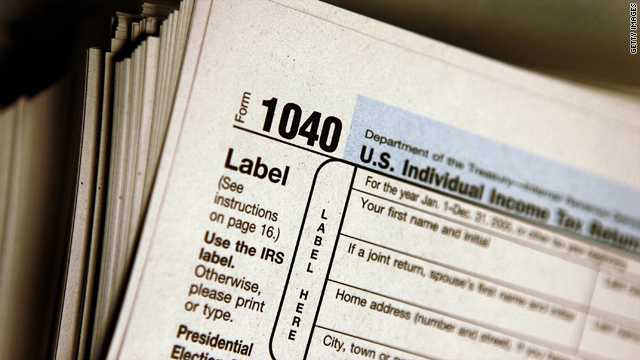 What does it mean when you have to work 107 days just to meet your tax bill?

With less than two weeks to go until taxes are due, think about this:

It's estimated Americans need to work 107 days just to earn enough money to pay their taxes.

A research outfit called The Tax Foundation says Americans will spend an average of 29% of their income on federal, state and local taxes in 2012.

That's more than what an average family spends on food, clothing and housing combined.

Nationally, the so-called Tax Freedom Day arrives April 17, which just happens to be the same day taxes are due.

But it comes earliest in states like Tennessee, Louisiana and Mississippi. Tennessee is the earliest at March 31.

States with higher average incomes - like Connecticut, New Jersey and New York - aren't free of their tax burdens until later in the year. Connecticut is the latest at May 5.

It goes without saying that not every situation is the same, but a lot of people are fed up with our current tax structure.

The co-founder of the private equity firm Carlyle Group says the government needs to change the law if they want the rich to pay more in taxes. Rubenstein adds that he's paying what he's supposed to pay under the current law - and it's unfair for people to say he's not kicking in his "fair share."

President Obama has been calling for the rich to pay their "fair share" in taxes. He wants to change the law so that people who make more than $1 million pay at least a 30% tax rate.

Here’s my question to you: What does it mean when you have to work 107 days just to meet your tax bill?

Dave in Laguna Niguel, California:
It means the government is too big and spends too much. Just think how long we would have to work to meet our tax bill if we also had to pay the trillion dollars they borrow each year!

Jim in Los Angeles:
Jack, Surely you were not referring to corporate CEOs, Mitt Romney, illustrious U.S. senators, Messrs Buffett & Gates, the executive ranks at Goldman Sachs, and those with assets of more than $5 million? If the taxes we pay as a percent of income were applied to all, it would not be 107 days for the vast majority of us.

M.:
If some in the government had their way, that is 258 days too few.

Greg in Arkansas:
Kind of an awkward question when you figure that millions of Americans have been out of work for more than 189 days and would gladly change places with any griping, gainfully-employed taxpayer where they could trade their unemployment check for a pay check.

Chris in Florida:
Jack, It means that there is a huge imbalance between those who pay and those who do not. Millionaires, corporations and billionaires don't count that way, and they are the problem. The working class bear too much and the others way too little. The number would go WAY down if big corporations paid a fair share.

J.B. in Nashville, Tennessee:
It simply means we need a new president and we need to oust the REAL “Party of No”, the Democratic-controlled Senate. They haven't even passed a budget in 3 years. Vote them out...imagine how that figure you mentioned (107 days) will Increase if they remain in the majority. Kiss your paychecks goodbye!

S. in Florida:
Guess I'll have to hold off on the car elevator, Jack.