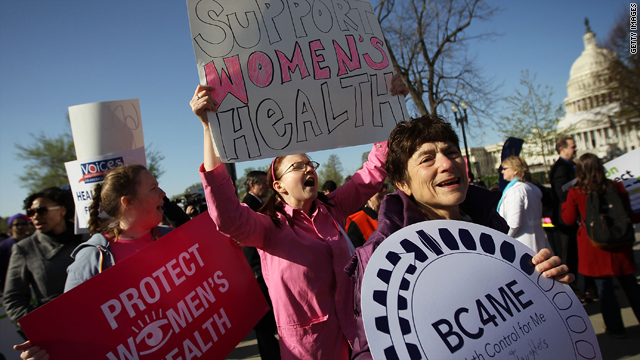 If Obamacare falls, what's next?

The fate of the Affordable Care Act now lies in the hands of the U.S. Supreme Court.

Although no one knows for sure which way the landmark case will go, last week's oral arguments did not seem promising for the Obama administration. Experts said they believe the individual mandate - and perhaps the whole health care law - is in jeopardy.

Supporters tell Politico that if the law goes down there could be significant ripple effects. They say that other federal laws could be on the firing line - including environmental one such as the Endangered Species and Clean Water acts as well as federal regulation of the labor market and laws preventing employment discrimination.

But opponents of the health care overhaul say liberals are just using "the sky is falling"-scare tactics.

Plus, they suggest if the Supreme Court upholds the individual mandate that could lead to future mandates, such as requirements to buy health food or gym memberships.

The Supreme Court decision is expected in June. And whichever way the court rules, there's no doubt it will be a political lightning rod for both parties coming just a few months before the presidential election.

It's estimated the cost to cover the typical family of four under an employer plan will top $20,000 this year, according to CNNMoney. That's up 7% from last year and would be the fifth year in a row health care costs rose 7% or 8%.

And even though employers pick up much of that tab, you can bet they're passing on their rising costs to the rest of us.

Here’s my question to you: If Obamacare falls, what's next?

Ralph in Orange Park, Florida:
If Obamacare falls, the Republicans in Congress will propose nothing to replace it because they have no constituency among those too poor to pay for health care. When/if the Democrats regain a majority in both houses of Congress, they can try again, only make it simpler this time.

L.:
The court may declare mandatory enrollment unconstitutional, but Congress has an obligation to then spend every minute reworking this bill to help all Americans get coverage. An unhealthy citizenship does not make for a strong nation. And the more we allow insurance companies raise rates, it will only get worse.

Tina in Wisconsin:
We'll have killed what should have been bipartisan middle ground. The mandate in question was a Republican ideal for 15 years until a Democrat agreed. Our health care has become nothing more then another piece of political gaming.

Martha in Pennsylvania:
We can only hope that there will be some common sense approach to providing health care for ALL Americans, such as the systems adopted in other developed countries. Otherwise, the only people with access to medical care will be those who either qualify for Medicaid, or who have lots of money.

Mack in Michigan:
I guess we’ll have to learn to live with what ails us. Or if we are really bad sick, get a gun, shoot holes in the ceiling of the nearest 7-11 and wait to be arrested. The government will provide health care for convicted felons. Hard-working people who've been fortunate enough to reach middle age… Not so much.