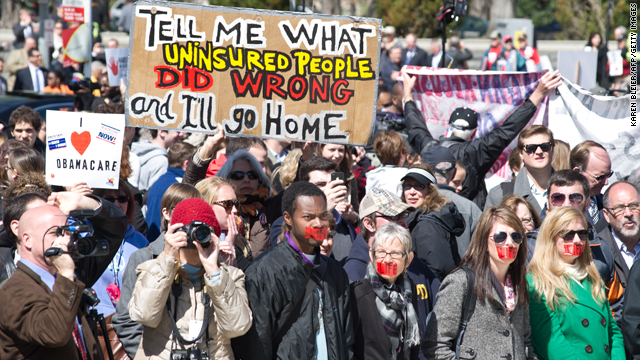 Should the Supreme Court arguments over health care be televised?

While the U.S. Supreme Court hears arguments about the constitutionality of Obamacare, only a few hundred members of the public and press can actually see what is happening as it's happening.

That's because the high court decided that there would be no televised coverage of the historic health care hearings.

Lawmakers, media and open government groups had pushed for the court to break with tradition and let TV cameras in to broadcast the three days of oral arguments.

Some say the Supreme Court's practice of no TV cameras is behind the times.

But the best they could get are daily audio recordings and transcripts of the hearings. The court says they're releasing these because of quote "extraordinary public interest" in the health care case.

No kidding. What these nine justices decide could have major effects on the political and economic future of this country. Not to mention the health care for millions of individual Americans.

Which is why polls show Americans overwhelmingly in favor of televising the arguments before the nation's highest court.

A new CNN/ORC poll shows 61% of those surveyed say the Supreme Court should allow TV cameras into hearings. Only 35% say no.

In December, Congress held hearings on the so called Cameras in the Courtroom Act. Supporters say TV coverage of the high court's hearings would provide more transparency.

Opponents suggest allowing cameras in would detract from the integrity and decorum of the institution. Baloney. That court is conducting the people's business, and the people have every right to witness what goes on.

Here’s my question to you: Should the Supreme Court arguments over health care be televised?