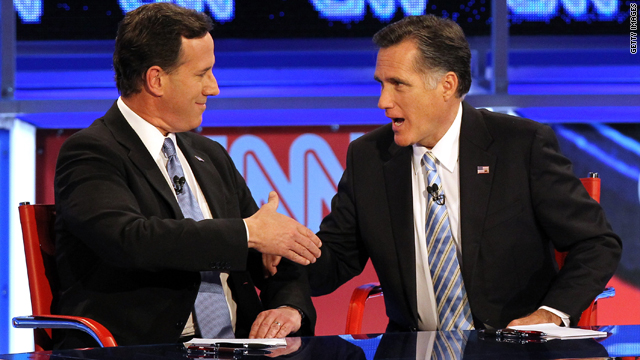 If you were Romney, under what circumstances would you ask Santorum to be your running mate?

Rick Santorum says he's not ruling out the idea of becoming Mitt Romney's running mate. Nobody's asked him, but he's serious. No B.S.

When asked by the Christian Broadcasting Network if he would consider a vice presidential offer by Romney, Santorum replied, "Of course."

Santorum says this race is "the most important race in our country's history" and he'll do everything he can to help his country.

When he was asked a second time if he's "keeping his options open" for a VP spot, Santorum didn't shoot down the idea.

Maybe he's finally facing the fact that he's not going to win the Republican nomination. It’s about time.

This idea is the perfect illustration of the phrase, "Politics makes strange bedfellows." Santorum has been vicious in his attacks against Romney.

He called Romney the "worst Republican" to nominate against President Barack Obama when it comes to the health care issue.

And Santorum had to walk back his comment that Americans would be better off with Obama winning a second term than Romney being elected.

Romney has already suggested he won't pick Santorum as his running mate because he's not conservative enough.

So whom might Romney pick if he wins the nomination?

Some of the names out there include Sen. Marco Rubio of Florida, Rep. Paul Ryan of Wisconsin, House Majority Leader Eric Cantor of Virginia and South Carolina Gov. Nikki Haley.

It's still early. Remember John McCain didn't find Sarah Palin until just before the convention. And what a find that was.

Here’s my question to you: If you were Mitt Romney, under what circumstances would you ask Rick Santorum to be your running mate?

Everett:
I'm not a Republican but I'm watching closely. If I were Romney, I could never approach Santorum to be a running mate. Rick Santorum is far too conservative to be electable. Romney should be shrewd at this point and find a popular moderate as a running mate. If he says the right things now he could be president.

Carolyn in California:
Hell freezing over comes to mind.

Greg in Arkansas:
Zero. After everything Rick has said about Mitt, I would rather ask my ex-wife to manage my checking account than to ask Santorum to watch my back as a V.P. candidate.

Doug:
If Romney wins the nomination, he will ask Lindsey Graham to run with him.

M.:
I don't know, but I am having a good laugh thinking of an answer.

Greene in Pennsylvania:
Under NO circumstances should Romney ask Santorum to be his Veep. Romney has my vote unless he does that.

John:
If I were Romney, I would be agreeable to having Santorum as my running mate provided that Santorum agreed to have his mouth taped shut whenever appearing in public.