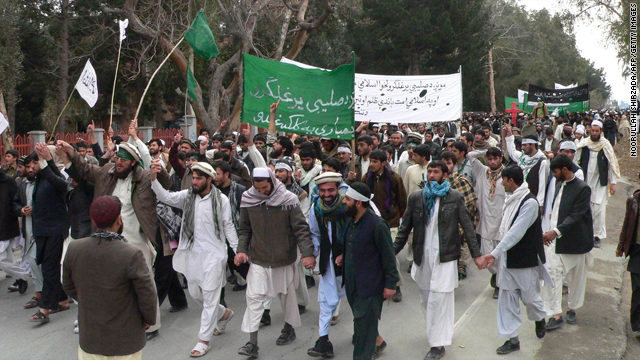 In light of recent events, what's the point of staying in Afghanistan?

How much is enough?

What will be accomplished by staying in that godforsaken hellhole for another 20 months that hasn't been accomplished in 10.5 years?

Events are beginning to conspire against the U.S. mission there. We had pictures of U.S. Marines urinating on dead bodies. We had the accidental burning of copies of the Quran, which further inflamed the hatred of the American presence there.

And now we have a U.S. soldier allegedly massacring 16 Afghan civilians, including women and children. The Taliban are threatening to begin beheading U.S. soldiers in response to this latest outrage.

Yet the Obama White House is insisting that none of this will deter us from our mission, which is what exactly? I have no idea what the hell we're doing there anymore. Isn't Osama bin Laden dead?

The Karzai government is a puppet regime that is barely friendly to our government, and the rest of the country hates our guts. Not unlike the way we might feel if an army of occupation had taken up residence in the United States and begun desecrating our dead, burning our Bibles and massacring our women and children.

Not to be cynical, but it's my nature. The one thing that might hasten our departure from Afghanistan is if Obama's re-election campaign is in trouble come Labor Day.

Suddenly with his second term in doubt, my guess is he might decide to move up the timetable for bringing our troops home. Hey, whatever it takes.

I don't know about you, but I've had a bellyful of Afghanistan.