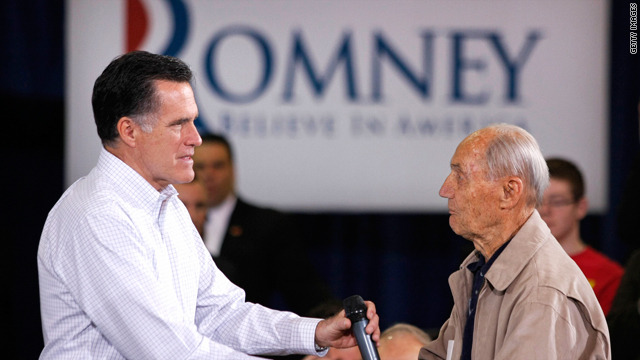 Why is Mitt Romney so popular with senior citizens?

While Mitt Romney may have issues with conservatives, independents and the South, there's at least one group, beside the very rich, that loves him: senior citizens.

Michelle Cottle writes for The Daily Beast about Romney's surge among seniors:

"The bulk of the American electorate may not consider mittens scintillating, but the 65-plus set clearly finds him pretty darn charming."

Exit polls from Super Tuesday show voters 65 and older were among Romney's staunchest supporters. In the crucial state of Ohio, he beat Rick Santorum in this age group by 15-points. Even in Tennessee, where Romney lost, he still won seniors.

Seniors were also key to Romney's earlier victories in Michigan, Nevada and Florida - and they were the only age group he won in Iowa.

Looking beyond the national nightmare of the Republican primaries, senior voters are the only age group where Romney outpolls President Obama.

Experts say the old folks like Romney because he focuses on things they care about - like the economy.

Also, they like the fact that Romney is generally more moderate in a field that keeps moving further to the right.

Even some of Romney's more awkward moments - like singing "America the Beautiful" - play well to the plus-65 crowd. Perhaps some of them couldn't hear it.

If he's going to be the next president, he has to pick up broader support among other voting blocs.

But remember this: on election day, seniors vote - maybe more than any other group. Gives them something to do that day.

Here’s my question to you: Why is Mitt Romney so popular with senior citizens?

J.D.:
I'm 63, technically a senior citizen, and I can't stand the guy. For starters, Romney wants to take away my medical care. Then, of course, there's the whole Seamus the dog on the top of the car thing. What kind of person does that to an animal?

Old Geezer:
The seniors like Mittens because he looks like the game show hosts they watch all day. They watch the debates and they think it's Family Feud.

Joshua:
Because old folks still have honor, integrity and love of their country, and are looking forward to replacing the current occupant of the Oval Office with someone who has those same qualities.

Dave:
Because he isn't black, and let’s face it, there are still a ton of old racist white people out there who have yet to die off.

Tom in Pennsylvania:
I disagree, Jack. I am a senior citizen and he is not popular with me, nor my pinochle-playing buddies.

Bill in Ohio:
Older folks remember when the two parties were more interested in a better America than trying to destroy each other. Mitt represents a middle ground in the Republican Party that unfortunately has been lost to the Conservative Right.

Larry on Facebook:
They have him confused with Gin Rummy.

Conor in Chicago:
It's because of his soothing vocal stylings when singing America the Beautiful.

D.:
No wonder they like him. He is the only one with enough money to cover their Social Security checks.