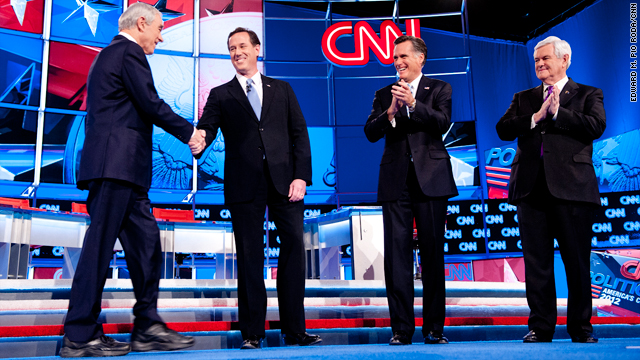 Can you hear the fat lady singing yet in the GOP race?

With two more victories last night, Mitt Romney has recaptured the momentum that has been so elusive.

Headed into Super Tuesday next week, Romney should have the wind at his back, with his big win in Arizona and the more narrow victory in his home state of Michigan.

Romney is also back on top of the national polls, after briefly losing that spot to Santorum.

And perhaps Romney senses he may soon end this thing. He didn't mention Santorum at all in last night's speech, saving all his fire for President Obama and fixing the economy.

It's worth pointing out that Romney still has issues with the Republican base. Michigan exit polls showed that Santorum handily defeated Romney among voters who define themselves as "very conservative" and those who want a candidate with a strong moral character.

But even if many conservatives aren't crazy about Romney, it's becoming difficult to see a path to victory for any of his competitors.

Working in Romney's favor, he beat Santorum in Michigan among voters who care strongly about defeating the president and among those who say the economy is their top concern. He also won the Catholic vote, which is a strong rebuke of Santorum.

Meanwhile, the Republicans better get their business sorted out, and soon. CNBC reports that markets are already beginning to anticipate an Obama victory in November. Stocks are rising on growing expectations that the president will be re-elected.

Here’s my question to you: Can you hear the fat lady singing yet in the GOP race?