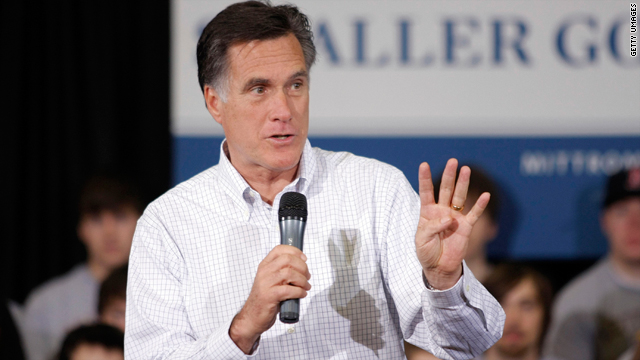 Should Mitt Romney be allowed to go off teleprompter?

When Mitt Romney goes off teleprompter, he has a record of promptly stepping in it.

Take that botched campaign event in his home state of Michigan on Friday - the one where 1,200 people showed up in a football stadium that seats 65,000.

Romney told supporters he drives cars made in Michigan:

Way to connect with blue-collar workers, Mitt. It's no wonder he's in a dead heat with Rick Santorum ahead of tomorrow's primary.

In that same speech, Romney made a repeated - and bizarre - comment about why he loves his home state, saying it feels good to be back in Michigan, "where the trees are the right height." Huh?

It appears that Romney has a serious problem when he goes off script: He sounds out of touch, elite or just plain strange. Examples abound.

He has said that he's "not concerned about the very poor," that there's a safety net in place for them.

Romney also said he likes "being able to fire people who provide services to me" in reference to choosing between different health insurance companies.

And he made the infamous $10,000 bet with former presidential candidate Rick Perry during an early debate. It's estimated that Romney is worth around $200 million.

In response to his latest gaffe about the cars, Romney says he can't be perfect. "I just am who I am," he said, adding that there's nothing wrong with being successful in America and that he wants to use his success to help the American people.

Here’s my question to you: Should Mitt Romney be allowed to go off teleprompter?

Jim in St. Paul, Minnesota:
If Mr. Romney goes off script, he will let us know who he really is. That is what we need to assess when we decide whether he should be our next president.

Nancy in Tennessee:
Mitt Romney is probably sincerely trying to convey that he buys American while alienating Americans who are just a few steps from the homeless shelter. From not caring about the poor to just not understanding what poor is, he has let the cat out of the bag: Rich is more fun than being poor.

Trees are just right in Colorado:
He's trying too hard to be something he's not - presidential.

Crystal:
If Romney stays on teleprompter he comes off as a robot, but when he speaks his mind he looks like an idiot. Bottom line: Romney does not have the empathy to be an effective people person and he does not have any firm convictions beyond promoting his own self-interest. He is exposed by the bright lights of being a front-runner, as an empty suit stuffed with cash. He is corporation pretending to be a person.

Rich in Florida:
I think Mitt should be allowed to just go. Period. Seriously, voters may like the real Mitt – the elite successful rich guy – better than they like this faux ordinary guy Mitt who keeps slipping up with $10,000 bets and his wife's two Cadillacs.

Simon:
When Mittens goes off script, we get to see the real Willard. I drive a car made in Detroit, vote for me. Maybe not.