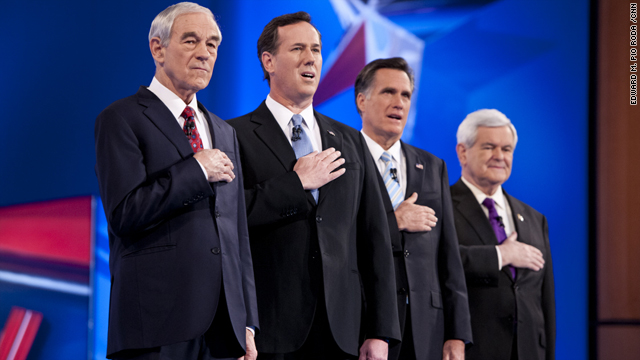 Who can save the Republican Party from itself?

They may manage to lose an election they could win - against a weakened incumbent in a troubled economy.

Which is why many Republicans are dissatisfied with the state of the GOP race for president and the remaining candidates.

There's Mitt Romney, who's been running for six years, has all the money in the world, and still can't get the party to line up behind him. Newt Gingrich seems to have done himself in after a couple spikes of momentum. Ron Paul has rabid supporters, just not enough of them to make a difference.

And of course, Rick Santorum, the current flavor of the month - who has a history of controversial comments, including about Satan, and lost his own U.S.Senate seat in Pennsylvania by double digits.

It's no wonder some Republicans are still looking for a savior.

A new Quinnipiac poll shows New Jersey Governor Chris Christie is the top choice of Republicans if there winds up being a "brokered convention." Christie - who gets 32% support - is followed by former Governors Sarah Palin and Jeb Bush at 20% and Indiana governor Mitch Daniels at 15%.

One of the reasons a lot of people like Christie is because he's such a straight talker. Most recently Christie told Warren Buffet to "just write a check and shut up." Gotta love it.

Christie is a Romney supporter who insists he's not interested in running himself. Too bad. You could put the Christie-Obama debates on Pay-Per-View and retire the national debt.

Other Republicans who might still jump into the race include Congressman Paul Ryan, Florida Senator Marco Rubio and former Arkansas Governor Mike Huckabee.

Here’s my question to you: Who can save the Republican Party from itself?

Bill:
The only person who can save the Republican Party from itself is Barack Obama. A Democratic Party perfect storm with Barack Obama as captain of the ship is the only thing that could allow the Republicans a chance at the throne. $6 gasoline, >10% unemployment, a new war with Iran and a terrorist attack on American soil is about the only set of conditions good enough to make the Republicans look plausible.

Mark in Houston:
Jack, A political party that professes destruction of the environment, calls science a hoax, relegates women to a second class status, and wants their religious beliefs to become our laws does not deserve saving.

Sharon in Colorado:
The GOP is like an old stained and raggedy T-shirt. Not even good enough to wear for yard work anymore. Well past it's time. A relic from the past that won't make it through another wash cycle. Time for the rubbish bin. GOP has become their own death panel & their decision appears to be suicide.

Ken in Connecticut:
The Democrats can. Vote Obama in for another 4 years. Then everyone look at the results. And the Republicans will win in a landslide in 2016.

Althea in Mount Vernon, Missouri:
Chris Christie could do it for sure. At least he will tell you exactly what he thinks. You may not like what he says or his policy but at least he speaks the truth. How refreshing.

Deborah in Colorado:
My favorite was always Christie but, ultimately, my favorite will be whoever is running against Obama since he is, by far, my least favorite.

Riley:
No one I can think of. The Republican Party doesn’t even want to vote for the remaining four. That’s why the president is singing and laughing.