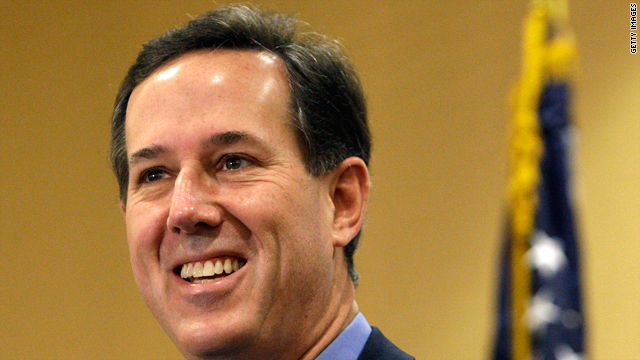 Rick Santorum said Satan is attacking America. Is he right?

The moral of the story is: If you think you’ll ever run for president of the United States, watch your mouth.

The Republican presidential candidate is under fire for a 2008 speech in which he said Satan is attacking the great institutions of America.

Speaking to students at Ave Maria University in Florida, Santorum said that "Satan has set his sights on the United States of America."

He described a "spiritual war" and asked, "If you were Satan, who would you attack in this day and age?" He suggested it was natural for the "father of lies" to go after a good, decent, powerful and influential country.

Fast forward four years and instead of acknowledging that the dialogue might have been a bit extreme, Santorum is digging in his heels.

He's defending his comments, saying he's a person of faith who believes in good and evil.

Santorum insists he is going to stay on message and talk about the things Americans want to talk about, such as economic recovery. He says his views on Satan are "not relevant" to what's being discussed today. Some people might disagree.

And when you want to be president, it's all fair game.

We'll see if at tonight's debate Santorum's thoughts on Satan come back to bite him.

Here’s my question to you: Rick Santorum said Satan is attacking America. Is he right?

Doug in Massachusetts:
No way. Satan doesn't have the sway to get in front of the big special interest groups already raping this country - Wall Street, big corporations, a crooked Congress. Get a clue, Rick. Satan is out of his league in the U.S.

Mike in New Orleans:
When any politician starts campaigning based on their superiority with regard to religious matters, it's time to change the channel. Rick Santorum knows how to pander to bigotry and extremism. And a nutty vote counts as much as a thoughtful one.

Rick:
Of course not. However, the welfare party (Democrats) is attacking the very fabric of this country, its work ethic, and its principles to create a socialist dictatorship that no other party can defeat.

Barbara in North Carolina:
Santorum is giving Catholics all over the world a bad name. He certainly seems to be off in another world somewhere. We need to know these things. I personally don't want a preacher of any religion in the White House.

Ed in California:
Yeah, and his name is Rick Santorum. I thought my crazy, crazy Uncle Paulie was nuts; he looks sane when compared to Santorum.

Tom in Texas:
And Rick knows this how? Did he get a phone call? I wouldn't be surprised if he said the world really is flat. The upside to that would be as he moves further right, as if that's possible, he'll fall off.