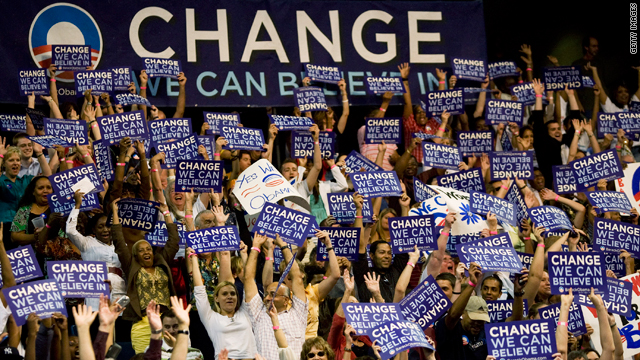 What would you suggest for President Obama's new campaign slogan?

It's time for a change from Change We Can Believe In.

President Obama's re-election campaign is looking for a new slogan to replace his 2008 mantras of hope and change.

Reuters reports that some of the contenders include Winning the Future, Greater Together and We Don't Quit.

His campaign posters still say Obama 2012 but surrogates have been road-testing some of these other ideas.

The campaign probably won't roll out the official slogan until the president knows who his Republican challenger will be, and that might take a while.

But whatever slogan President Obama goes with, it needs to represent a new reality. That includes high unemployment, economic insecurity and the fact that Mr. Obama is no longer a Washington outsider.

Senior campaign strategist David Axelrod insists the 2012 election is also about hope and change - even though those words may not be in the slogan.

The branding of a presidential campaign is all about connecting with voters. President Obama hit the nail on the head last time around, but lightning doesn't always strike twice.

One of the best campaign slogans ever was Ronald Reagan's 1984 re-election slogan, Morning Again in America.

What is Mr. Obama up against? The Republicans' slogans are highlighting their belief that the U.S. is on the wrong track under President Obama.

Mitt Romney uses Believe in America, Newt Gingrich has Rebuilding the American Dream plastered on his bus, and Ron Paul says he will Restore America Now.

Here’s my question to you: What would you suggest for President Obama's new campaign slogan?

END_OF_DOCUMENT_TOKEN_TO_BE_REPLACED 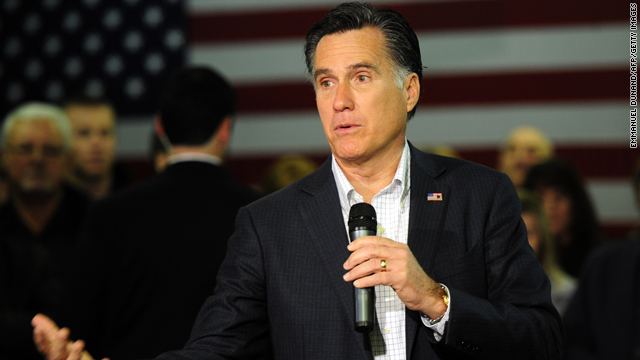 How close is Mitt Romney to becoming toast?

There's growing concern among Republicans that Mitt Romney can't deliver. If he loses his home state of Michigan next week, expect those whispers to become shouts.

Rick Santorum has opened a 10-percentage point lead over Romney in one national poll - his largest lead ever. Gallup's latest daily tracking poll shows Santorum leading Romney 36% to 26%. Santorum is also leading in Michigan, where Romney's father was governor, and in the key swing state of Ohio.

And all the money in the world doesn't seem to matter. The Romney campaign spent nearly $19 million last month. The super PAC supporting him spent another $14 million, and he's still fighting off the likes of Rick Santorum. What's more, Romney spent nearly three times what he brought in last month.

One of the few things still working in Romney's favor is electability. A USA Today/Gallup Poll shows Americans think Romney is nearly twice as likely as Santorum to beat President Obama.

Meanwhile, some senior Republicans are so nervous about the state of the race that they are circulating a so-called Plan B: a scenario where another candidate - who's not even in the race yet - wins the nomination and faces off against Obama.

Some of the names out there include the usual suspects: Indiana Gov. Mitch Daniels, New Jersey Gov. Chris Christie and former Florida Gov. Jeb Bush.

While none of them seems all that interested, there's always Sarah Palin. The half-term dropout governor of Alaska says that if there were a brokered convention, she'd "do whatever I could to help." That prospect should help Republicans sleep well at night.

Here’s my question to you: How close is Mitt Romney to becoming toast?