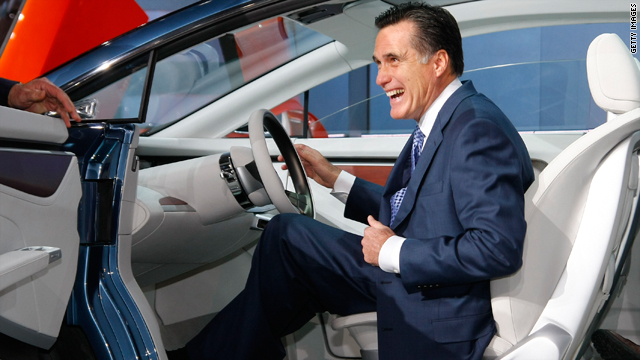 How big a deal would it be if Mitt Romney loses his home state of Michigan?

Mitt Romney grew up in Michigan. his father, George Romney, was the president of American Motors and later the governor.

Two weeks from today, there's a very real chance Romney could lose the Republican primary in his home state.

Now, it's one thing to lose any of the other 49 states, but it's another thing entirely to lose your home state where your dad was governor.

Michigan is a state especially hard-hit by the recession and chronic unemployment. We came within an eyelash of losing the domestic auto industry, which was born and almost died in Detroit.

So if there's ever a place where a wealthy Republican who seems out-of-touch with the common man might have a problem, it's Michigan - and he's got a problem there.

In an attempt to connect with Michigan voters, Romney is out with an op-ed piece in today's Detroit news. In it, he calls himself a "son of Detroit" and says that American cars "got in my bones early."

He also defends an op-ed piece he wrote back in 2008 called Let Detroit go Bankrupt, in which he suggested managed bankruptcy would have been preferable to a bailout of America's car companies. Maybe so, but without the bailout many of the people Romney is looking for support from today probably wouldn't even be around.

Romney insists things in Detroit got worse after President Obama's intervention. He writes the government should sell off its auto stock - and turn that money over to the taxpayers.

Here’s my question to you: How big a deal would it be if Mitt Romney loses his home state of Michigan?

Sylvia in San Diego:
As big a deal as when Ted Kennedy's seat went to a Republican.

Karl in Flint, Michigan:
I guess historically it is psychologically important for a candidate to win his home state, but since no one so far has won the majority of primaries, it's not a real indicator of anything. Also, Mitt was born here, but never held office here like the others have in their home states. I'd say his winning or losing Massachusetts would be more telling then Michigan.

Andre:
It would mean that people have somehow woken up and asked themselves, "Where did the money go?" He may have been a kid here while we were kids, but now we're adults and he's an adult and he's got money and we don't. I've got the wrinkles, calluses, and fatigue … and he's going to parties every night wearing some pretty nice clothes.

Gigi in Oregon:
I'm more worried if Rick Santorum can win Pennsylvania. Pennsylvania voted him out of the Senate.

Tanner in Arizona:
I think that it would be a big blow to his campaign, but he would be able to recover if he wins Arizona. If he loses both, it will be very hard for him to regain momentum.

Steve in New York:
The liberals are foaming at the mouth to see that happen. It would guarantee Obama's re-election. But I think once Mitt Romney wins the nomination, it's all the way to the White House. Obama is very afraid of Romney.

Ralph in Chicago:
If Romney lost Michigan, it would be like Obama losing Illinois. I live in Chicago, where we vote early and often and at times in alphabetical order. Obama would never lose Chicago or Cook County. In fact, when I die I want to be buried in Cook County so I can stay active in politics.