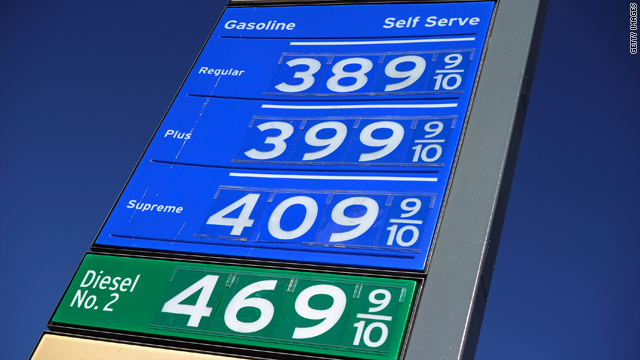 If gasoline hits record prices this summer, how much will it hurt President Obama's re-election chances?‬ ‪ ‬

The national average for regular unleaded gasoline is now $3.52 a gallon, according to the Energy Department. That's up more than 4 cents a gallon from a week ago, and experts are predicting that this summer, gas prices could go higher. Much higher. Think record highs.

Gasoline could top $4 a gallon by June, and in some places it could be near $5. Big cities like Chicago and San Francisco could be especially hard hit.

According to AAA, the all-time high U.S. average was $4.11 a gallon in the summer of 2008. We could easily hit a new record as summer driving season kicks into high gear and Obama gears up for the fall campaign.

Consider that when Obama took office in January of 2009, the average cost for a gallon of gas was $1.79. Gas prices have almost doubled since he took office, and they're headed higher.

There are several reasons for the jump in gasoline prices - including the possibility of war in the Middle East. There's also the closing of refineries, along with the increased demand for gasoline as summer travel season approaches. Plus the government requires a switch from cheaper winter gas formulations to more expensive summer ones.

But all those reasons aside, whether it's fair or not - the American motoring public has always tended to blame the guy in the White House for high gas prices.

Here’s my question to you: If gasoline hits record prices this summer, how much will it hurt President Obama's re-election chances?‬ ‪ ‬

Susan in Ohio:
It will hurt, but with all the current turmoil in the GOP, I still think Obama will pull it off in November. I only hope he can get a Congress that will work with him. We really need to get alternative energies going in a serious way or we are literally doomed. More wind farms, solar panels, geothermal and nuclear power plants will do wonders for lessening our addiction to oil.

Mark:
It's what this socialist regime wants, to control our everyday lives including our transportation. Your president has this vision of a European-type of transportation society where we all use buses, trains, bicycles, and very few cars because of the price of gas. Remember what he said? "We can't drive our SUVs” around....

Lisa on Long Island:
People with a brain will connect gas prices with what’s going on in the Middle East, not the president. What the other 90% of Americans will think is anybody's guess.

Abram:
If Obama hadn’t killed the Keystone Pipeline, gas prices would be down. So Obama lost my vote.

James in Greenville, North Carolina:
Not at all, Jack. The Obama faithful are immune. The smell of gas fumes will not deter them from Obamamania. I really don't think the liberals even drive, do they? Obama knows the faithful will never falter over a few more dollars per gallon. What is it the preacher says when you get married? "Love is blind?"

Joe in New York:
Americans have a short memory, Jack. As long as the price of gas is back down by November, nobody is really going to care.

Mark:
If gasoline hits five bucks a gallon this summer, I will WALK through the snow and ice next fall to vote AGAINST Obama. If it's two dollars a gallon, I will drive over to vote against him anyway.