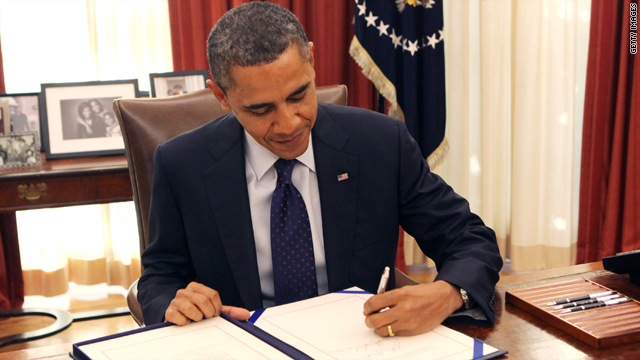 Should the payroll tax cut be extended yet again?

160 million Americans could see their paychecks shrink at the end of the month - if Congress doesn't strike a deal on the payroll tax cut. This is the same cut they extended for only two months at the end of December, and those two months are just about up.

The payroll tax cut reduces how much many Americans pay into Social Security on their first $110,000 in wages.

For someone making $50,000, this tax cut is worth almost $1,000 per year. Significant money. Of course it's money we don't have, but that's never stopped the government before.

Just this afternoon, Congress inched one step closer to making a deal.

House Republicans now say they're willing to extend the payroll tax cut for the rest of this year without offsetting it with spending cuts elsewhere - something they weren't willing to do last week.

Can you tell it's an election year?

Republican leaders also say the measure could be voted on as soon as this week.

Lawmakers only have a little over two weeks to go before February 29, and they're scheduled to go on recess starting next week. They certainly deserve some more time off since they get so much done while they're in Washington.

Meanwhile the deadline could come even sooner, as many employers need to cut their first March-dated paychecks well before the last day of February. If Congress doesn't make a deal by the middle of this week, payroll processors will have to change their systems to reflect the higher tax rate.

Here’s my question to you: Should the payroll tax cut be extended yet again?

Rob:
Yes, it should be reduced, but the cap should go away, and all income, wages, and investments should be included. Better benefit for those who pay more and the solvency of the system is ensured.

John in Pennsylvania:
Come on, Jack. This is only an election year ploy. The money that should be going into the S.S. fund is being replaced by money from the general fund putting the government further in the hole. Most Americans should be willing to sacrifice a little rather than add to the deficit.

Merilyn:
If this was a debate about a tax cut for the rich, the Republicans would again be beating their drum about not taxing the job creators. But since this tax cut would primarily benefit the working poor, there is no urgency. After all, Mitt is not concerned about us.

Luke:
As someone who doesn't even make $50k a year, I cherish every dollar in my paycheck. However, we have a Social Security system that is going bankrupt and needs as much funding as possible. We live in a time where tough choices have to be made if we want things that we've taken for granted for decades to remain available.

Jane in California:
It should never have been cut in the first place. There are much better ways to get stimulus into the economy. Building infrastructure creates something that may be of use and value for years. A couple of extra pizzas a month, not so much.

J.D. in N.H.:
Absolutely. As long as people sitting around the pool waiting for their checks to arrive get to pay 15%, the people who actually do work for a living need a break.