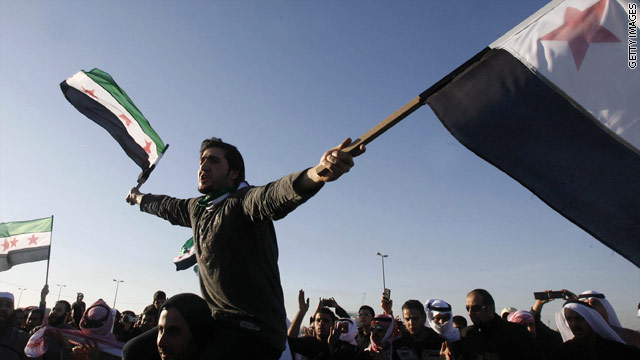 Why isn't anyone doing anything about the bloodshed in Syria?

Another deadly day of bloodshed... as the world stands idly by and watches Syria's government murdering its own people.

Opposition groups say more than 50 people were killed today. Hundreds more were reportedly killed in the city of Homs over the weekend.

And the killing has become butchery. One Syrian told the New York Times of seeing the beheaded bodies of women and children lying on the roads.

And the civilized world looks on and does nothing.

China and Russia vetoed a U.N. Security Council draft resolution that would have demanded President Bashar Al-Assad stop the violence.

China and Russia say it was a potential violation of Syria's sovereignty.

The U.S. - along with other Western and Arab nations - are pushing back, calling for the international community to do more.

The U.S. says it was "disgusted" by the veto.

Secretary of State Hillary Clinton said that blocking the U.N. resolution is to "bear responsibility for the horrors" happening in Syria.

President Obama has condemned Syria's "unspeakable assault" against its people.

France calls the recent massacre in the city of Homs a "crime against humanity."

The British say the veto will only encourage more killing, while Germany says "the scandal would be failure to act."

Lots of words, no actions and the killing continues.

The U.N. says at least 5,000 people have died since the conflict started.

Here's my question to you: Why isn't anyone doing anything about the bloodshed in Syria?