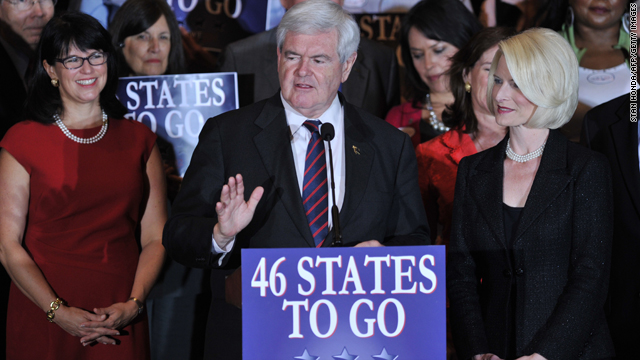 Does Newt Gingrich have a problem with women?

Three marriages and two divorces later, it turns out Newt Gingrich might have a real problem with women. Go figure.

As part of the beating he took in Florida on Tuesday night, Gingrich was abandoned in large part by female voters.

Exit polls in the Sunshine State showed Romney getting 52% of women Republican voters, compared to only 28% for Gingrich - a 24-point margin. It was also a turnaround from South Carolina, where Gingrich won the women's vote.

It's no secret that Gingrich has been saddled with this personal baggage from the start of the race.

And he's been quick to own up to it, saying that he's done things he regrets, but it's all in the past. Gingrich talks about making peace with God and likes to describe himself as a 68-year-old grandfather.

It actually looked like these issues might come crashing down on Gingrich before the South Carolina primary, when his second ex-wife told ABC News he had asked her for an open marriage. But in the end, South Carolina voters brushed it off.

But now that the women voters of Florida have spoken, it remains to be seen if women in the rest of the country will give him a pass.

Here’s my question to you: Does Newt Gingrich have a problem with women?

Mack in Michigan:
I can’t speak for the other 120 million or so women he hasn't had an affair with yet, but the one I'm married to doesn’t like snakes, spiders, and lizards. And she thinks A Newt is at least two out of those three!

Annie in Atlanta:
He does with this woman, and it's not just the adulterer in him that makes my skin crawl. I find his divisive, hateful rhetoric compounded by a blown-up sense of self- importance repulsive. I think of it as an "ick factor." Ewww.

Don in St. Louis:
We sweat the petty stuff too much in this country. A federal government completely out of control. A monumental debt that threatens our financial stability. Millions of people out of work. Let's get the country back on track and then consider these trivialities. If Newt or any other candidate can work to fix the truly important issues in the country, but carries a few marital anomalies, I'm okay with that.

Nick in Texas:
We should let his ex-wives answer that question. The man has no respect for women; he has proven that more than once. So he better not count on women to give him that push he needs. Actually he needs a shove right out of the GOP race. I don't want to call him a pig, because you might not read my comment, but you know what, he is a PIG!

Lloyd in North Carolina:
South Carolina women are more accepting of open marriages than Florida women. They are used to husbands who go for long hikes on the Appalachian Trail.