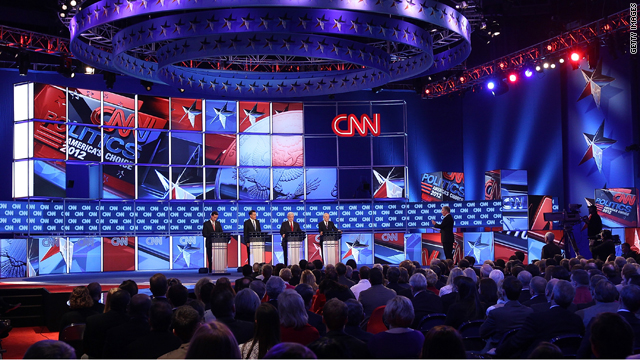 Should debate audiences be allowed to react?

As the Republican candidates get ready for yet another face-off in Florida for tonight's CNN debate, there's a growing focus on what happens offstage during these events.

A piece in The New York Times asks if the news media have been creating too raucous an atmosphere by encouraging audiences to react, in order to create better television.

There's no question these debates are more lively when the audience reacts - from applause to cheers and boos. But the reaction from audience members who are partisan toward one candidate or another can distort the impression the viewer at home might otherwise get.

Newt Gingrich made a stink earlier this week after NBC's Florida debate, since moderator Brian Williams asked the audience to hold their applause until the commercial breaks.

Gingrich threatened not to participate in future debates if the audiences can't react. Picking on one of his favorite targets, the media, Gingrich said NBC's rules stepped on free speech.

But then Gingrich feeds off rowdy audiences, and they helped propel him in back-to-back knockout debate performances in South Carolina last week. Some even suggest Gingrich was off his game Monday night because the crowd wasn't allowed to respond to his zingers.

Well, Gingrich won't have to worry about that tonight. The audience at CNN's debate will be allowed to express their reactions, as long as they're respectful.
However, should Gingrich go on to win his party's nomination, he'll have to settle for debates versus President Obama without any applause.

According to the rules set by the commission on presidential debates, those audiences must remain silent.

Here’s my question to you: Should debate audiences be allowed to react?

Ann in South Carolina:
Audience reaction allows those of us watching on TV at home to sense how the candidates’ comments are being received, which can be helpful. It is like reading letters to the editor or comments on this blog, allowing us the opportunity to learn from other people's opinions – as long as we use the information to form our own opinions. Also, let's face it, the CNN debate in South Carolina was a lot more fun to watch than NBC's debate.

Tim:
I don't have a problem with applause. But when they start screaming and booing like it's a football game, I think it's over the line.

Cary:
Having this many debates reduces it to a sideshow. Considering the crop of candidates, maybe freak show is closer to the mark. The first step to legitimizing the debates would be reducing the number of them. The second would be discouraging audience reactions. By doing things the way they have it's turned the Presidential race into a reality show. All they need is Simon Cowell and to rename the debates "American's Got Political Talent". Instead of a record deal they win four years as President.

Doug:
The debates are not about the crowds. There shouldn't even be a studio audience there.

Dennis in Florida:
Jack, This question seems insane. Why have an audience if they can’t react? Why do you think they have live audiences for sit-coms? So that real people can laugh at the clowns. Is a political debate any different?