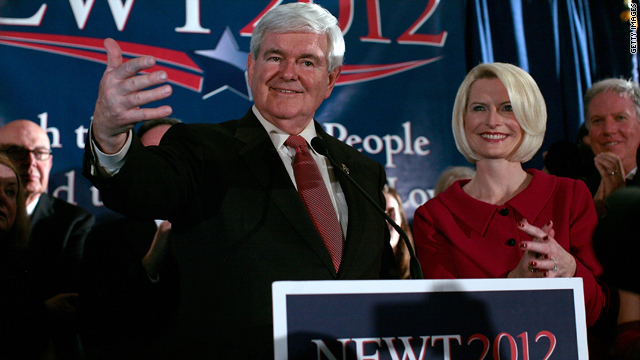 Newt Gingrich has risen from the dead for a second time in this roller-coaster that is the Republican nomination battle.

With his decisive double-digit win in South Carolina, Gingrich now heads into Florida with a head full of steam.

South Carolina has the distinction of picking every Republican nominee since Ronald Reagan in 1980, and what Gingrich did there is nothing short of amazing. It's also a bit puzzling.

A piece in Politico suggests that the surging Gingrich has mastered the art of both debates and disguise.

There's no question Gingrich's debate performances – and the free media he gets from them – have been a key to his success. Last week, his answer about food stamps and his beating up on the media helped him win over South Carolina conservatives.

As for the disguise part, Gingrich uses his master debate skills to camouflage his weaknesses as a candidate: the three wives, leaving the first two while they were ill, his erratic leadership, etc.

One ex-wife's claim that Gingrich wanted an open marriage might have done him in. But in the end, she didn't lay a glove on him. The voters yawned.

Mitt Romney must be tearing his hair out; it wasn't supposed to be this way.

With much less money and a smaller organization, Gingrich is once again threatening to take away his crown.

It’s a stunning comeback for a candidate who was sent off to the political graveyard for the first time last summer. His staff quit after he went on a Mediterranean cruise and reports surfaced of his million-dollar line of credit at Tiffany's. But Gingrich roared back to life in December, shooting to the top of the polls before collapsing again ahead of the Iowa caucuses.

He just won't go away.

Here’s my question to you: What's the secret to Newt Gingrich's success?