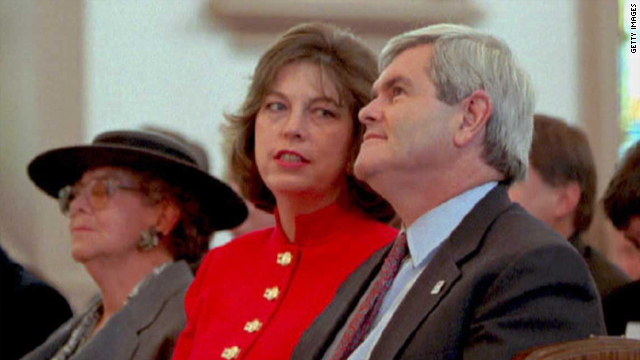 When is the proper time to release a potentially damaging interview with one of Newt Gingrich's ex-wives?

What's that phrase of which Republicans are so fond? "Family values"?

Just two days before the South Carolina primary, Newt Gingrich's second ex-wife is out with some tawdry details about him that suggest he has the morals of an alley cat.

In fact, Marianne Gingrich tells ABC News that Newt lacks the moral character to be president. Married to Gingrich for 18 years, says she's coming forward now so voters can know what she knows about him.

And here's what she knows:

She says Newt asked for an "open marriage" so he could have a wife and a mistress. That mistress has since become his third and current wife, Callista.

Gingrich reportedly asked Marianne if she would "share him" when he admitted to a six-year affair with Callista, who is a former congressional aide.

Keep in mind this was around the same time that Gingrich was going after President Bill Clinton for his lack of moral leadership during the Monica Lewinsky scandal.

Marianne says Newt asked for a divorce just months after she was diagnosed with multiple sclerosis. Gingrich divorced his first wife while she was being treated for cancer. Family values.

Meanwhile, ABC News will air the full interview tonight on "Nightline." Apparently there was disagreement at the network over the timing of the interview, given its potential effect on Saturday's primary in South Carolina.

The Drudge Report first leaked word of the interview last night –14 years and a day after Matt Drudge broke the Monica Lewinsky story.

As for Gingrich, so far his response to all this seems to be referring the press to ask his daughters about it. It's part of that whole family values thingy.

Here’s my question to you: When is the proper time to release a potentially damaging interview with one of Newt Gingrich's ex-wives?