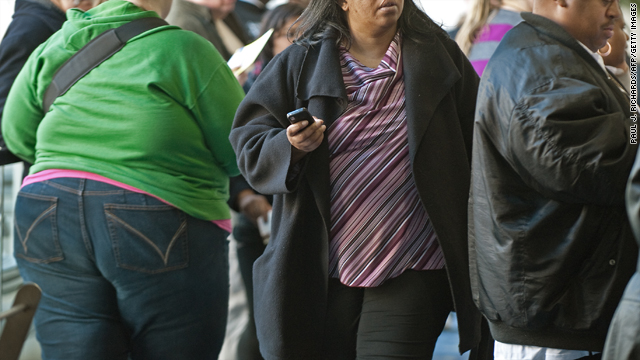 Why can't the U.S. make any progress in the fight against obesity?

New government reports show that nearly 36% of U.S adults and 17% of children and teens are obese.

When you add in overweight Americans, more than 2/3 of adults and about 1/3 of children are either overweight or obese.

Although these rates are up dramatically from a decade ago, they have leveled off in the past few years.

However certain racial and ethnic groups are still seeing increases in obesity rates.

For example, 59% of black women and 45% of Mexican-American women are obese. Also - for children and teens - obesity rates are higher among Hispanics and blacks.

Health experts say that while overall obesity rates have stopped climbing, the best way to lower rates is to stop people from getting fat in the first place.

Obesity is a national epidemic contributing to a range of illnesses from joint damage to certain cancers, heart disease and diabetes.

Speaking of diabetes, we learned this week that cooking icon Paula Deen has Type 2 diabetes.

Deen is a well-known TV personality who is overweight herself and whose Southern recipes are full of fatty ingredients.

And isn't it interesting that after being diagnosed with the diabetes three years ago, Deen chose to tell the public about it only after making a deal with a Danish pharmaceutical company that makes an injectable diabetes medication?

Here’s my question to you: Why can't the U.S. make any progress in the fight against obesity?

Cliff in New York:
Two reasons, Jack. Our driven for-profit health care system is set up to treat disease, not prevent it. And our driven for-greed Congress is in the pocket of the food services lobby.

Floyd in California:
I lived in Ecuador for 3 years. Upon arriving I lost 10 lbs, then a pound a month without changing my diet and with less exercise. Why? They do not add fat and hormones to their meat... Also the altitude increases your metabolism. In the U.S., what food producers put in our food puts on the pounds. Your only way to lose weight here is to starve.

Jerry:
No one these days wants to get up off the couch and exercise. Most would rather sit, eat potato chips and watch such educational shows as Jersey Shore or the never-ending GOP debates. Need I say more?

Doug:
I am about 30 pounds overweight and it is killing me. Every time it gets serious I drop a few pounds, and then I start feeling better again and slip back into my old habits. Winter is the hardest time. I find that smoking two packs of cigarettes a day, and drinking 5 cups of coffee, plus eating a bacon and fried egg sandwich every morning helps. Hershey’s chocolate snacks, cheese and potato chips are good snacks to get you through till the evening meal, which usually means chicken and potatoes, followed by Fosters Beer and good cheap red wine. Hope this helps Mr. Cafferty.

Kevin in San Diego:
Watch Food, Inc.! Americans are fattened up on corn just like the chickens, pigs and cows! Simple greed is why!

Paul in Texas:
It's the other oil addiction, Jack... the one made from lard.