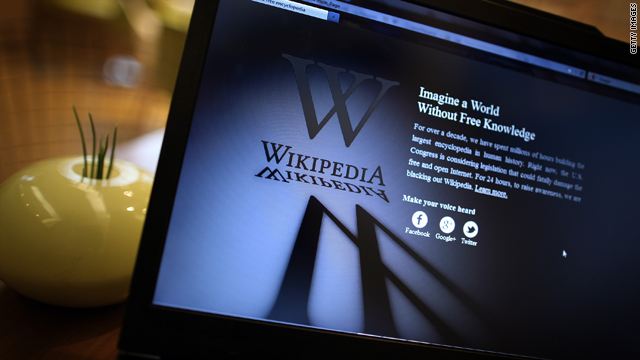 Should the U.S. government censor the Internet?

It’s been a Wednesday without Wikipedia and other major websites. As they go dark to protest two anti-piracy bills in Congress, critics say these bills amount to censorship of the Internet.

The web-wide protest is in response to the Stop Online Piracy Act, or SOPA, in the U.S. House and the Protect IP Act, or PIPA, now pending before the full Senate.

The battle lines are drawn with Hollywood and major media companies, including CNN's parent company, Time Warner, on one side and Silicon Valley on the other.

If the bill passes, copyright holders could seek a court order to force search engines such as Google to remove links to sites that are offering illegal movies, TV shows, songs, etc. The main targets are foreign websites.

But Internet companies worry they could be punished for users' actions. Google says YouTube would have to go dark immediately if the bill passes, saying "it couldn't function."

On the other side, supporters say that online piracy leads to job losses in the U.S. since content creators lose income. They dismiss accusations of censorship, saying that the bills are meant to fix a broken system that doesn't prevent piracy.

Many in the tech world agree that piracy is a real problem, but they worry about the implications of this legislation, fearing that it's a foot in the door that could lead to further government controls.

Meanwhile the bills that were once expected to sail through Congress have hit rough waters. One Senate aide tells CNN that because of the growing protests, the bill might not even make it to a vote.

Here’s my question to you: Should the U.S. government censor the internet?

Bonnie in New Jersey:
The U.S. government is so dysfunctional at this point I don't think it needs to be telling me what I can and cannot see on the internet. I mean, really, censoring the internet, steroids in baseball, bullying... What else can they find to make it look like they are doing something while the country falls apart?

Jon in Alabama:
Jack, Taking someone’s creative work and then selling it to make a profit is wrong. It violates copyright laws. Movies and television productions are protected by case law and legislative statues, but the internet makes it easy to steal these creative works for profit. It should be stopped.

Pete in Florida:
Absolutely NOT. Once again, some politicians and large corporate interests are trying to control our lives. This country is supposed to be free, but is becoming more like commie Russia and pre-WW2 Germany every day. Will the KGB and the Gestapo be kicking in your door some night because you visited the "wrong" websites?

Michael on Facebook:
Wikipedia can't function because most of its content is in violation of copyright materials. It isn't censorship to give the Encyclopedia Britannica and others their day in court. The foot in the door argument is nonsense, since fair use exceptions would still apply, as they do now. The last I checked, the Internet evolved from the need to keep communications infrastructure alive in time of nuclear war. While it is now mostly private, it is simply ignorant to not recognize that it exists within a governmental environment.

Mark in Oklahoma:
They already censor radio, and television. Can't they keep their sticky fingers off my internet? I'm calling Al Gore!