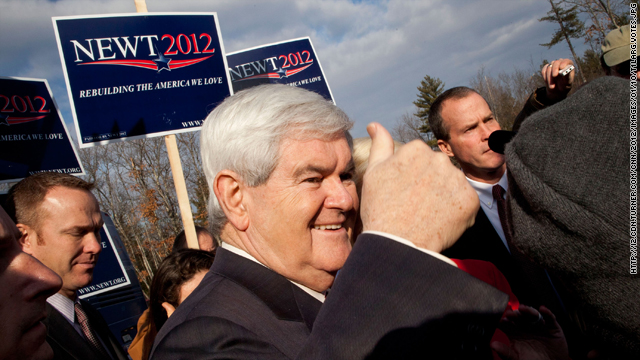 What happened to Newt Gingrich's promise to take the high road?

"Thou shalt not speak ill of another Republican."

That was President Reagan's 11th commandment and a mantra for the Republican Party. These days, not so much.

For a while there, Newt Gingrich was all about running a positive campaign. Back in Iowa, he called on his supporters to stay positive and avoid attacking fellow Republican candidates.

The former House speaker said he would refrain from such attacks so the eventual nominee could emerge from the primary to face President Obama "unbloodied." The plan was to devote his energies to "real issues," like the economy and unemployment.

That lofty rhetoric matched his onetime lofty standings in the polls. When his numbers started to drop, so did his civility. Eventually, Gingrich imploded in Iowa and finished a distant fourth in the caucuses.

Flash ahead to New Hampshire, and guess what? The old Newt is back, snarky and snarly as ever, spewing personal attacks on a near-daily basis.

Gingrich has called Romney a "liar" and full of "pious baloney."

It's the same old story with these guys. They all say going negative is not their "first preference." Newt says he needs to defend himself.

But at what cost to the party? Pat Buchanan writes that the "bad blood" between several of the Republican candidates could wind up damaging the eventual nominee. He likens the Republican primary process to a circular firing squad.

Buchanan suggests that the candidates' attacking each others' character could play right into the Democrats' hands, saying, "such wounds take time to heal. Some never do, and some will not be closed before the Republican convention."

Here’s my question to you: What happened to Newt Gingrich’s promise to take the high road?