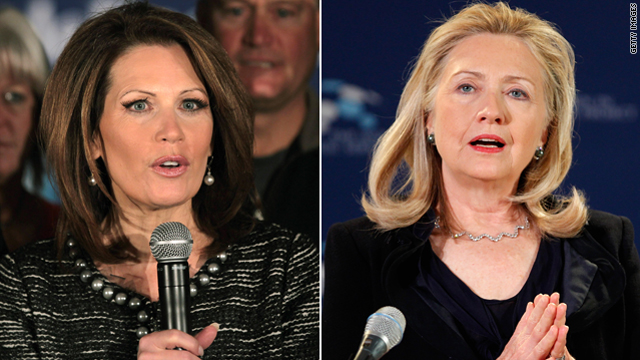 Rich:
A woman that has the presence, determination, leadership and political savvy that Margaret Thatcher had when she became Prime Minister of England. Right now I do not see anyone in either party, man or woman, who has these qualities.

David in Virginia:
Bachmann spun the wheel and lost, but for no gender-discernable reasons. Hillary Clinton was eminently electable until Obama got in the way. Back then, you asked, "What will it take for an African-American to become President?" Are you never satisfied?

Jim in Los Angeles:
Jack, You must be kidding. Being the weaker gender, women get kicked around by men, are expected to maintain a home, earn a second income, be submissive, provide fantasy sex, raise children and behave. Hillary Clinton would make a fabulous president...she acts like a man!

Bill in New Mexico:
It will take everything that was required for Obama to be elected! The previous party's president has to be hated enough, despised enough, dumb enough– for the voters to forget completely all of their biases. That is what is required for America to elect a woman president.

Paul in Texas:
When the last good ole' boy retires, which may not be that much longer.

Ken:
Good question, but the only answer is that first a woman must be elected vice president. From that platform, she will be halfway to getting elected. Mrs. Clinton would have been a good choice in the last election to be the VP and therefore President in 2016.