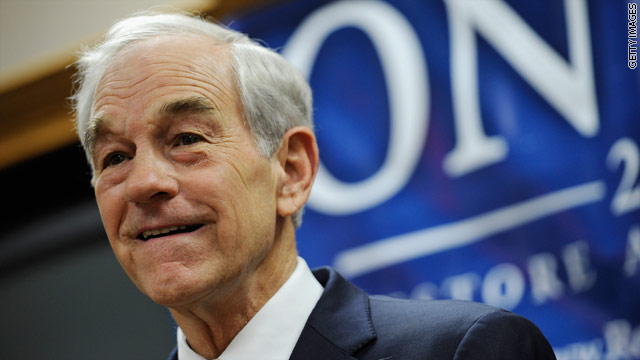 What will happen to the Republican field if Ron Paul wins the Iowa caucuses?

Two weeks from now we'll know the answer, but as of this moment, Ron Paul is the odds-on favorite to win the Iowa caucuses. And that has many mainstream Republicans positively apoplectic.

Despite being largely ignored by the mainstream media, the 76-year-old congressman from Texas is at - or near - the top of polls in Iowa entering the homestretch in the first 2012 GOP race for the White House.

What's refreshing is Paul has done it the old-fashioned way, with a consistent message and the best outreach operation in Iowa.

Andrew Sullivan writes for The Daily Beast that Paul is generating enthusiasm and support among young voters and Democrats and independents ... in other words, voters who could help Republicans defeat President Barack Obama in November.

You would think that's just what the Republican Party is looking for - someone who could defeat Obama next year.

Not so fast. Republicans are already set to spin a Paul win in Iowa by basically ignoring it.

A Washington Examiner column by Timothy Carney suggests the primary contest will get "downright ugly" if Paul wins in Iowa.

Carney points to Pat Buchanan's New Hampshire victory in 1996, saying both the Republican establishment and the media rallied to end his campaign.

Carney says if Paul wins, his critics will imply he is "a racist, a kook, and a conspiracy theorist."

Whether the GOP establishment likes it or not, Paul has the power to shake things up if he wins in Iowa.

People in Iowa are rallying around someone who, for the first time in a long time, represents real change. And that has to scare the hell out of both parties.

Here's my question to you: What will happen to the Republican field if Ron Paul wins the Iowa caucuses?