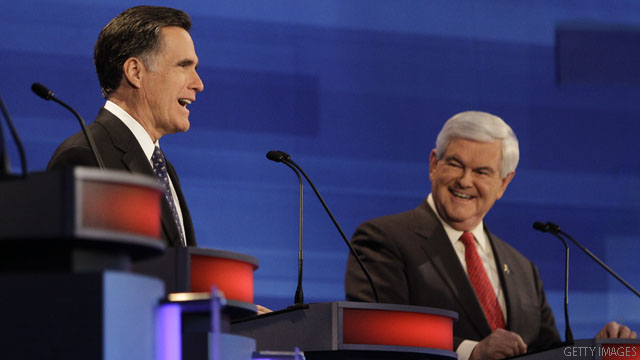 Should President Obama be more afraid of Newt Gingrich or Mitt Romney?

While the Democrats wait to see whether President Obama faces off against Mitt Romney or Newt Gingrich come November, a lot of them think Gingrich would be easier to beat. They may be very wrong. The latest CNN-Opinion Research Corp. national poll has them tied at 28%.

But as one Democratic adviser tells Politico: "Romney is playing not to lose, and Newt thinks he has nothing to lose."

Sure, Gingrich has his weaknesses and his dirty laundry: like his lack of discipline, no campaign infrastructure, his infidelities and three marriages, and the $1.6 million he took from Freddie Mac.

But when you get past all that, what you have is a more dangerous, talented and unpredictable rival than Romney.

Politico points to several reasons why team Obama should not take Gingrich for granted:

While Romney is no dummy, Gingrich knows his stuff. Gingrich has risen to the top of the Republican pack mostly based on his dominant debate performances. He has even offered to debate Obama, saying the president could use a teleprompter.

- Next, Gingrich fires up the base. He leads Romney when it comes to support from self-described conservatives. And Gingrich can reach out to the GOP’s wealthy donors while still taking swipes at Washington.

- Then there's Newt's mouth. Republicans love the way he attacks Obama. True, there's always the chance he'll go too far, come off as arrogant or self-destruct.

- Finally, Gingrich would be harder to target on Medicare or immigration, since his policies are more moderate than Romney's.

Here's my question to you: Should President Obama be more afraid of Newt Gingrich or Mitt Romney?