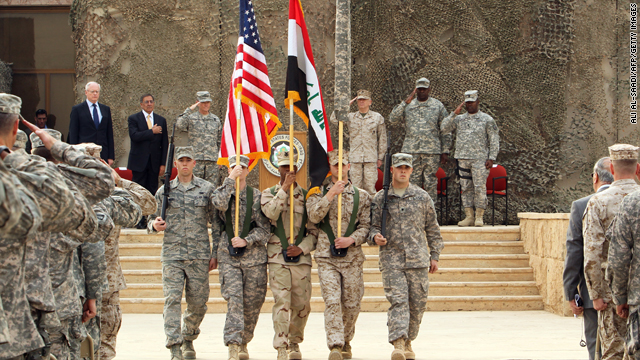 A symbolic flag-lowering ceremony at an Army base near Baghdad marks the end of U.S. forces' mission in Iraq after nearly nine years of war that began with the invasion to oust Saddam Hussein.
December 15th, 2011
05:00 PM ET

Why after all these years can't our government bring itself to tell us the truth about Iraq?

I don't know about you, but I'm a little tired of being treated like a mushroom by my government. You know... kept in the dark and fed fertilizer.

President Obama is hailing the end of the Iraq war as though the enemy had signed the terms of surrender on the deck of the U.S.S. Missouri. What hogwash.

This is the same war Obama referred to as dumb nine years ago, but now it's "Hail to the Chief," marching bands and rah-rah-rah. Look what we did.

What we did was invade a country that had done nothing to us, killed hundreds of thousands of their people as well as thousands of our own, bankrupted the Treasury in the process - all in the search for weapons of mass destruction that a cynic might suggest we knew didn't exist in the first place.

The Iraqi government told us a few months ago to get the hell out of their country. That's why we're leaving. We're being kicked out. Nothing noble about that.

Before we were told to take a hike though, we built the largest embassy in the world along with more than 500 military bases at the height of the war. All at taxpayers' expense.

We had every intention of occupying. We had no intention of going anywhere. See there's all that oil over there.

As it is, we will leave behind some 17,000 people at that embassy compound. Yes, some will be members of the diplomatic corps, but there will also be contractors and intel folks who can keep an eye on things. Just in case those weapons of mass destruction turn up. Or Iran tries to fill the power vacuum, which it will.

What garbage. And the government has the gall to paint this as some sort of military triumph.

This isn't the end of anything. It's the beginning of a long-term occupation not unlike Japan and Korea and Germany.

Here’s my question to you: Why after all these years can't our government bring itself to tell us the truth about Iraq?

Kendra in Alabama:
If the Obama administration admits that the Iraq War was a mistake, they'll have to answer for the three extra years our troops have been there. Also, let's be honest, he will do and say anything to make himself look good for re-election.

B.J. in Illinois:
They are good liars, good liars stay with the lie. Question: Why do they have so many secrets? It's supposed to be an open society.

Ed in Texas:
Stay alert, Jack. The same Neo-Cons who sold the war in Iraq are hard a work on their next project: a war with Iran.

Bonnie in New Jersey:
Seriously Jack, did you use the words truth and government in the same sentence? Whether it be Iraq, bailouts, how many are really unemployed, "job creators", etc., they think we are a bunch of blithering idiots who believe anything they tell us. It's like being married to an unfaithful spouse: if I don't get caught, it didn't happen!

Richard in Texas:
What is our government going to say? Whoops??? Sorry? Mission accomplished 9 years later? How did invading Iraq make America a safer place to live? What economic benefit was this war to America?

Bob:
Very simply put, Jack: the truth hurts. The first thing we did after invading Iraq was to protect the oil fields. As we depart, we continue that pursuit by protecting the oil fields in Southern Iraq. It always has been and always will be about the oil.