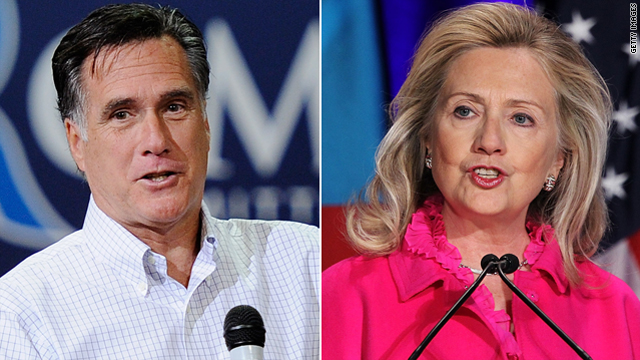 Is Mitt Romney the Hillary Clinton of 2012?

He probably wouldn't appreciate the comparison - but Mitt Romney just might turn out to be the Hillary Clinton of 2012.

Politico talked to veterans of the Clinton campaign who pointed out "eerie" similarities between the two campaigns.

Both Clinton in 2008 and now Romney in 2012 were "supposed to" be their party's nominees - both well-funded and establishment-blessed candidates. Clinton lost to Barack Obama in that bruising, drawn-out battle, while Romney faces a more-than-serious threat from Newt Gingrich.

Here are some other similarities:

Where Clinton took a stand on her vote to authorize the Iraq war, Romney has refused to apologize for the health care mandate in Massachusetts, which some Republicans see as a fatal flaw.

Both Clinton and Romney initially ran cautious campaigns, trying to stay above the fray. When it didn't work - they went negative.

And both suffered a major debate gaffe: For Clinton, it was a muddled answer she gave on driver's licenses for illegal immigrants. For Romney, it's the now-infamous $10,000 bet.

But there are also differences.

While Romney has faced a series of opponents, from Michele Bachmann to Rick Perry, Herman Cain and now Gingrich, the Clinton team battled what they saw as a Kennedyesque, once-in-a-generation politician - Barack Obama.

Another difference that could work in Romney's favor: Clinton's rival, Obama, had an extensive organization in the later-voting states. Romney doesn't have to worry about that.

Lastly, there is that chance for Romney to win this thing if Gingrich self-destructs, something Clinton's people never expected Obama to do - and he didn't.

Here’s my question to you: Is Mitt Romney the Hillary Clinton of 2012?

Doug:
Good question. I was among those who thought Hillary Clinton was a lock for the nomination in 2008. But this situation is different. In 2008, the Democratic Party was trying to win, and they let the chips fall where they may. In 2012, The Republican Party establishment is desperate to lose, so they are backing the best candidate available, ( Romney), to accomplish the goal.

Terry in Virginia:
No. That's an insult to Mrs. Clinton. When she was a candidate, her positions didn't change like the wind. However, there is an apt comparison with how the media treated Mrs. Clinton and how it treats Mr. Romney.

Mel in Houston:
I see no comparison at all except for the fact that Hillary was the early front-runner until Obama gained his voice. She had no record to run against like Romney. She didn't fiip flop around like a tiny catfish on a pier. You knew you could trust her because she was basically espousing the same ideas as Bill Clinton. No one trusts a person that speaks out of both sides of his mouth.